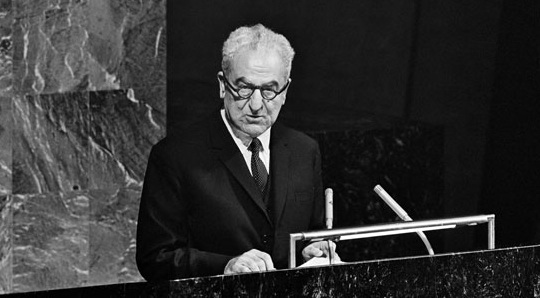 On September 13, 1980, Charles Malik gave an address called “The Two Tasks” at the opening of the Billy Graham Center at Wheaton College. He was the Lebanese Ambassador to the United States. The message was so seminal that in 2006 (his centenary) it was republished with a collection of essays built around it. What strikes us as he stands to speak is the personal dimension and the public scope of his Christian commitment.

I speak to you as a Christian. Jesus Christ is my Lord and God and Savior and Song day and night. I can live without food, without drink, without sleep, without air, but I cannot live without Jesus. Without him I would have perished long ago. Without him and his church reconciling men to God, the world would have perished long ago. I live in and on the Bible for long hours every day. The Bible is the source of every good thought and impulse I have. In the Bible God himself, the Creator of everything from nothing, speaks to me and to the world directly, about himself, about ourselves, and about his will for the course of events and for the consummation of history. And believe me, not a day passes without my crying from the bottom of my heart, ‘Come, Lord Jesus.’