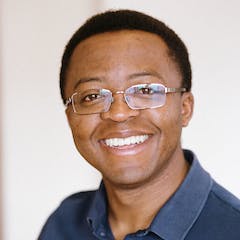 Dieudonné Tamfu is assistant professor of Bible and theology, and coordinator of the Cameroon Extension Site for Bethlehem College & Seminary. He and his wife, Dominique, live in Yaoundé, Cameroon, with their two children.

The Hidden Enemy of Family

The Church Is Bigger Than Any Church

The Gods of the Prosperity Gospel

Dieudonné Tamfu is assistant professor of Bible and theology, and coordinator of the Cameroon Extension Site for Bethlehem College & Seminary. He and his wife, Dominique, live in Yaoundé, Cameroon, with their two children.

The Hidden Enemy of Family

The Church Is Bigger Than Any Church

The Gods of the Prosperity Gospel

The scene is set in the sixth month of Elizabeth’s pregnancy (Luke 1:26). John the Baptist is six months old in the womb. God sends the same angel, Gabriel, from the previous prediction into Galilee to an engaged virgin by the name of Mary (Luke 1:27). The angel comes and declares to Mary, “Rejoice, O favored one.” The passive “favored” shows Mary is a recipient of grace. Mary is a model believer, joyfully receiving grace from God.

The apex of favor is to have God’s presence with you (Luke 1:28). The phrase “the Lord is with you” recalls Isaiah 7:14, where Isaiah prophesied “Behold, the virgin shall conceive and bear a son, and shall call his name Immanuel.” The Hebrew Immanuel means “God is with us” (see Isaiah 8:8, 10).

Mary, like Zechariah (Luke 1:12), trembled (Luke 1:29), wondering what kind of greeting it was she just received. The angel tells Mary, “Do not fear,” and states a reason: “For you have found grace before God” (see Luke 1:30), which is an explanation of the greeting “favored one.” Unsought favor was shown Mary, which is true of how God graces us.

In Luke 1:31–33, the angel explains this favor; namely, that Mary will have a messianic Son whose reign will know no end. Mary will conceive, she will bear a Son, and she must call his name Jesus (the Hebrew for Joshua, meaning Savior), fulfilling Isaiah 7:14. God is about to come into the world — the Advent — to finally awaken worship and inspire adoration.

Putting Science in Its Place

Second, Elizabeth’s six-month pregnancy becomes a faith-strengthening work of God (Luke 1:36). If Elizabeth’s dead womb can come alive and conceive, then “nothing will be impossible with God” (Luke 1:37). Mary responds to the angel, “Behold, I am the servant of the Lord; let it be to me according to your word” (Luke 1:38). She trusts that the God who once spoke creation into existence from nothing can speak into a womb marked my nothingness and bring a King from it.

Come, Let Us Adore Him

Elizabeth and her unborn son acknowledge the lordship of Mary’s Son, who is Lord even from within the womb. Elizabeth confesses his lordship while her son leaps in the womb for joy. Both the old and the unborn recognize the presence of the unborn Lord of history (probably still in the first month of pregnancy), submit to him (Luke 1:42–43), and find joy in him (Luke 1:44) — the long-awaited advent of true adoration and worship.

Mary, filled with the Holy Spirit, breaks into praise to God for his kindness, power, and faithfulness to fulfill the promises of old. Mary’s song can be divided into two major sections: Luke 1:46–53 and 54–55. The first section builds on 1 Samuel 2:1–10, Hannah’s song after she was told she will conceive Samuel. The last section of Mary’s song alludes to Genesis 17:19, predictions of Isaac’s conception.

In Luke 1:26 — “In the sixth month . . . ” — the prediction of the birth of Christ is set in context not of Herod’s kingship, but of John the Baptist’s conception. Luke intends for his readers to see close parallels between the prediction of John’s birth and that of Jesus’s. He uses phrases and repeated themes to show this.

1. Both births are predicted, which is not common in Scripture.

10. Both recipients raise questions about the predictions, and the same Greek phrase is used to describe the angel’s response: “and the angel answered and said to . . . ” (Luke 1:19, 35).

The two predictions part ways as night and day. These dissimilarities are significant for our understanding of the way these two predictions relate and what Luke aims to tell us about the Jewish Messiah, Jesus.

First, the prediction of Jesus’s birth is given to Mary directly and not to her soon-to-be-husband. This indicates that she is indeed a virgin who is not yet under the legal and covenantal authority of Joseph.

Second, the angel goes to a city, Galilee, not the temple, to give the prediction of the birth of Jesus (Luke 1:26). God can be encountered in history-changing ways outside of the temple.

Third, the major distinction between the two predictions is on the description of the sons to be born.

4. Whereas John will simply prepare a people ready for the Lord (Luke 1:17), Jesus “will reign over the house of Jacob forever” (Luke 1:33) — over God’s people.

5. Whereas John’s ministry will end, as he will simply prepare a people for one who will come after him, Jesus will reign forever, “and of his kingdom there will be no end” (Luke 1:33). The story of his reign has no conclusion because it continues forever — the only story in the universe without a conclusion.

What do these parallels mean? Luke wants us to see that the miraculous conception of John the Baptist simply sets the stage for the ultimate miracle of a virgin conceiving a child. The pattern of miraculous conceptions in the Old Testament — Sarah, Rebekah, Rachel, Samson’s mother, Hannah — which is repeated with Elizabeth, escalates with the conception and birth of Christ. As great as those conceptions in the Old Testament were, they simply set the stage and serve as shadows of a great miracle to come.

The climax of this pattern shows that the child to be born will be a new and better Isaac — the beloved offspring of Abraham, the substitute offering for sinners. A new and better Joseph — betrayed by his own, but who becomes the means of their salvation. A new and better Samson — who gains victory over the chief enemy of God’s people, sin and Satan. A new and better Samuel — the greatest and last of the prophetic line Samuel instituted, and the anointer of the king of Israel — only this time he anoints himself as the King of Israel.

The announcement of Christmas results in praise because that is why Christmas exists. Christmas exists because God is making worshipers of God by the power of the Holy Spirit under the reign of the new David, the Son of the Most High.