From a merely human perspective, probably not. But that is not our perspective. Last year in the same final Sundays we gave $177,530. We need $122,470 more than we gave last year in this same period. The $300,000 that we need is our estimated expenses, which is less than our proposed budget. We have not overspent.

Our giving this year has been good. We are about 5.5% ahead of last year’s giving. This parallels our increased attendance which is 6.4% over 1992. But we budgeted an 11.7% increase in expected giving. Hence the crunch.

What did we budget for? Are we getting fat at home at the expense of Christ’s mission in the frontiers? For an answer to that question compare the proportions in the two charts below. For example, compare the decrease of the Staff/Pastors percentage (51% down to 42%) with the increase of the Missions percentage (22% up to 34%). This represents an actual six-fold increase in missions giving in the last ten years (1983: $72,000 to 1993: $484,000). 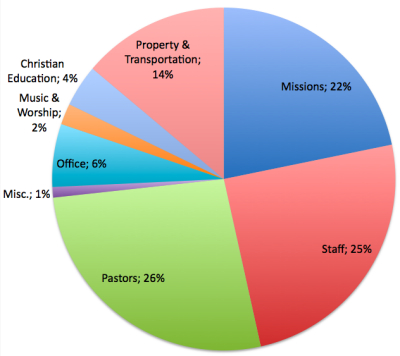 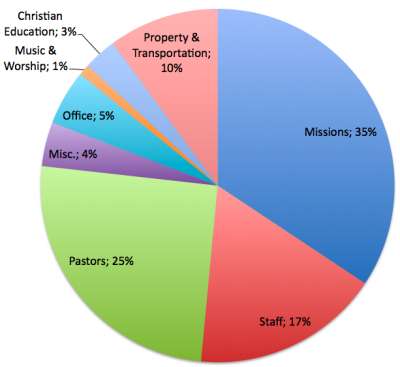 In other words what we are experiencing in large measure is the financial implication of being not merely a church, but also a missionary sending enterprise. Our recruits are increasing faster than our constituency. Can we rise to the increasing challenge of sending more and more missionaries? To be specific: 2000 by 2000. This is the prayer goal we believe God called us to.

How might God enable us to give $300,000 in the remainder of this year? 1) He could move all those who have not at least tithed this year to do some dramatic catch up work. 2) He could give big bonuses to some of you who are totally committed to his cause. 3) He could stir up hundreds of us to dip into our savings for an extraordinary gift for his name’s sake. 4) He could cause outsiders to give who love Bethlehem but don’t go here. 5) Most of all he could do “beyond what we are able to think” (Ephesians 3:20).

From a human perspective 5000 people could not be fed from five loaves and two fish. But that was not Jesus’ perspective. Nor ours. Yet no disciple would have been able to predict where the food would come from. Therefore the key is: Will you pray earnestly with me for God to do what we can’t even imagine?

You Can Be Forgiven

Deep down, we long for forgiveness — to be washed clean from our sins and welcomed home to our God. And Jesus lived, died, and rose to make that forgiveness possible.

All the Called Are Kept