Longings of a Former Lesbian 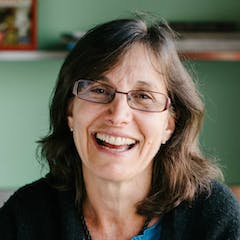 Rosaria Butterfield is former tenured professor of English at Syracuse University. She is a homeschooling mother and writer and pastor’s wife, and is grateful to God that her church has been able to worship on the Lord’s Day at the church building once again.

Bless Those Who Hate You

Host as You Are

Get More from the Bible This Year

Can the Pandemic Be an Answered Prayer?

Rosaria Butterfield is former tenured professor of English at Syracuse University. She is a homeschooling mother and writer and pastor’s wife, and is grateful to God that her church has been able to worship on the Lord’s Day at the church building once again.

Bless Those Who Hate You

Host as You Are

Get More from the Bible This Year

Can the Pandemic Be an Answered Prayer?

That particularly bitter New York winter whipped harsh promises against the front door of my neighbor’s house — promises that remained elusive and unimaginable.

Behind that door, my neighbors, Ken and Floy Smith, and I were talking.

Before It Was Hate Speech

Decades ago, when this question unsettled my God-rejecting-but-otherwise-moral life (as I would have described it then), I believed the latter. I believed that ethics drove truth, and that truth was a cultural creation, born out of the sheer goodness of humanity and the felt needs of people. When my neighbor asked this question, I immediately rejected it as ill-informed and vulgar — somewhat like the weak decaf in my mug. I shot back with years of schooling in situational ethics: Truth is a social construct. Truth takes its shape in the eyes of the beholder.

We were talking, my neighbor and I, about gay rights. This was a topic both personal and political for me. I identified as a lesbian, and lived happily in a committed relationship with another woman. I loved my girlfriend the way it felt best to me. I cared about my queer community. I co-authored the first domestic partnership policy at my university. I was poised to become a “tenured radical” — a university professor with enough job security and hutzpah to take queer theory from the university to the street.

I was standing, so I believed, on the right side of history. But my neighbor, Ken Smith, then-pastor of the Syracuse Reformed Presbyterian Church, was also my friend. He, his wife, and I shared weekly meals — sometimes at my house, but mostly at theirs — where we talked about deep and weighty matters of life and faith and worldview. Where we listened and disagreed and came back again the next week to do this again: to break bread and talk.

Twenty-two years ago, it was not considered hate speech for Ken to tell me that he accepted me as a lesbian, but did not approve. I rejected Ken’s worldview, and he rejected mine. We were on even ground. We saw clearly our worldview differences, but those divisions, back then, did not come with the accusatory weight of personal attack. In today’s playbook, that wouldn’t fly.

Why? What is standing in our way of becoming friends with our neighbors who think differently than we do?

My conversations with Ken and Floy came before the idea of “intersectionality” had moved from the academy to the streets. Intersectionality was, in 1997, still just an academic idea. Its premise was this: personhood and identity, who you really are, is best determined by how many social oppressions you have suffered.

Originally, intersectionality dealt with material, structural oppressions — highlighting how race and class and the glass ceiling of sexism weigh heavy in a society made up of sinners. But when feminism shifted allegiance from Marx to Freud, when it turned from numbers to feelings, sexual orientation and gender identity took on new forms.

Intersectionality informs the divide between Christians and our neighbors who think differently, but God’s people should never be sucker punched by the current fad in worldview — even if some segments of the evangelical church are smitten by it. The real problem is not what the world thinks, but rather that parts of the evangelical church are allowing the world to preach to it about personhood and identity — about who people really and ontologically are, and what they need to flourish.

Many tragedies occur when the world preaches to the church (and the church listens), and one is that false conversions multiply. We live in an evangelical world whose prophets may be convinced of gospel promises, but who are not necessarily converted under gospel truth. And what is the sermon topic that they preach? They preach sermons of questions, relocating what God calls sin into the category of aesthetics — the observation of beauty amidst the pain. They reject God’s truth as “bumper sticker” logic, and answer questions with more questions, with no answers, always favoring a sinner’s point of view over that of the crucified and risen Christ.

Once leaders in the evangelical church locate something that God calls sin into an aesthetic framework, the great gift that the Lord Jesus holds out to his people, the gift of ransom and repentance, is no longer considered necessary. The blame shifts from a person’s sin to the church’s perceived prejudice.

What to do? Make sure that you are a member of a biblically sound church whose practices embrace the marks of faithfulness: handling rightly the word, the sacraments, and the practice of church discipline. If your church fails to meet these standards, or you refuse membership because it ties you down, or you think that making peace with sin will allow you a place at the table to witness Christ to the world, think again. Your church membership is part of your spiritual discipline for engaging with the world. If you hold membership with a church that practices or endorses sin, you have made yourself corporately guilty of this sin.

Social media infatuation has removed distinctions between private and public. Ken and Floy Smith and I had private dinner gatherings. Often other people joined us. But our heartfelt differences were not subjected to the harsh glare of Twitter, Facebook, or blogs.

Instead of mocking or attempting to destroy each other on social media, we pondered our differences, and brought a hot dish to the next Thursday night meal. This response helped us to let some offenses slide and focus instead on the big picture. It encouraged us to regard each other as human beings — not blank slates filled by competing ideologies and power relations.

Ken and Floy and I became friends before this current cultural moment. We could see that our humanity was intimately connected to, but not completely absorbed by, our differing worldviews and the sets of ideas, vocabulary, books, and values they represented. We could see each other as human beings even across our differences. And because of this perspective, we could come to the table, break bread, and talk.

So, Christian, how can you begin to constructively engage with your neighbors? Know your culture, take membership vows in a biblically faithful church, and return to a practice of privacy. Yes, intersectionality has found its foothold today, not only in the wider culture, but also in some segments of the evangelical church. It’s a worldview that comes with ultimatums (“love me, love my dog”). It’s a worldview that rests on unbiblical notions of ontology (who people are). It rejects that original sin is really sinful, preferring to regard this sin that registers in our hearts before we take our first breath as merely a form of aesthetic difference.

And the best way for God’s people to say “no” to unbiblical reflections of personhood and intersectionality is to say “yes” to biblical hospitality. When you gather around the table with your perceived cultural enemy, not once, but weekly, you show that culture is not king. Jesus is. Ask good questions and listen to people’s answers. Perhaps you could start with this one: Do you believe that what is true determines what is ethical, or do you believe that what is ethical determines what is true?

Give Me More of God

The Sovereign Call to Sexual Purity

The command to pursue sexual purity is empowered by the promise that God sanctifies everyone he saves.