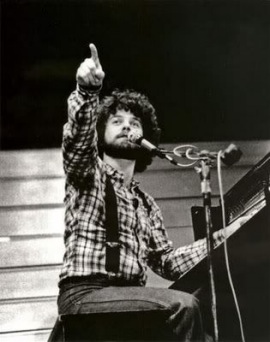 Today, July 28th, marks the 28th anniversary of the plane crash that killed Christian singer/songwriter and evangelist, Keith Green. He was 28 years old. Also lost in that crash were two of Keith’s children (Josiah & Bethany), the pilot (Don Burmeister), and an entire family (John & Dede Smalley and their six children).

I clearly remember July 28, 1982. I had just turned 17 and only recently had discovered Keith’s music. He was unlike anyone I had ever heard. It wasn’t music that drew me to Keith. It was his heart.

Keith was in love with Jesus in a way that few seemed to be. His passion was the kind I read about in the New Testament. Keith was real. You could tell just by listening to him.  And you could also tell that Keith wasn’t mainly about music, he was about a message. He didn’t care about his career; he cared whether or not people followed Jesus. Keith was all about spreading a passion for the supremacy of Jesus.

And because of that, I loved his music. Keith had quickly become a hero of mine. His sudden death was shock.

The main reason I pay tribute to Keith today is because his influence has shaped one significant aspect of Desiring God. When John and I launched this work in 1994, we both agreed that DG should adopt the same whatever-you-can-afford policy for our resources that Keith’s Last Days Ministries had for his music. This policy has served thousands of people. And I thank God for Keith’s example in this.

Keith certainly didn’t get everything right. He didn’t have great things to say about Reformed theology, although some of his song lyrics show that he was more reformed than he may have realized (see “You Put This Love in My Heart”). But he was only a Christian for about 7 years and did almost all of his growing in public ministry. And considering how long it’s taken me to learn things, I’m amazed at how well he did.

But in many ways Keith was a kindred spirit. He was passionate about Jesus, sought to spread that passion, loved the Bible, lived a war-time lifestyle, exhorted people not waste their lives, sought to mobilize people for missions, and lived out radical generosity. Keith’s life was short, but he lived well and did not compromise.

So it’s fitting that today we thank God for the life of Keith Gordon Green.

Is there a good, wise, and Christian Hedonistic way of celebrating the value of duty in the Christian life?

If you have no battle plan in the war against temptation, you give Satan the advantage. Take time to learn from the only one who never sinned.