Come on, dads, have some courage. Just say, “Over my dead body are you going to wrestle a girl.” Of course, they will call you prudish. But everything in you knows better.

Yes, I am talking to the boys’ fathers. If the girls’ fathers don’t care how boys manhandle their daughters, you will have to take the lead. Give your sons a bigger nobler vision of what it is to be a man. Men don’t fight against women. They fight for women. 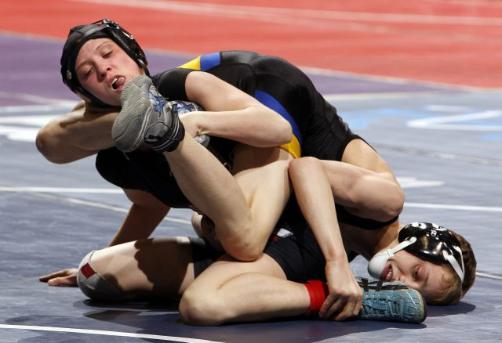 They called it history-making here in Minneapolis. Yesterday, Elissa Reinsma became the first female to compete in the state high school wrestling tournament. It was not a step forward. Some cultures spend a thousand years unlearning the brutality of men toward women. This is an odd way to make history. Relive prehistory maybe.

One cheerleader said, “I’m sure it’s weird for other people, especially if they’ve never experienced having to wrestle a girl.” That’s hopeful. Because it is “weird.” Most people feel it. But who has the courage to trace this sense of weirdness back to the profound principles of mature manhood and womanhood?

It’s just too uncool. The worst curse that can fall on us is to be seen as one of those nutcases who hasn’t entered the modern world. This is not about courageous commitment to equality; it’s about wimpy fear of criticism for doing what our hearts know is right.

Wrestling obliges you to grab, squeeze, and pull with all your might. If a boy tries not to touch or grasp a wrestler around the chest, or not to let his legs entwine with the other wrestler, or not to slam his full body length on hers, he will wrestle with a handicap. Of course, he is being taught that handicap is not a virtue.

Get real, dads. You know exactly what almost every healthy boy is thinking. If a jock from Northern Minnesota encircles her around the breasts and twists his leg around her thighs, trust me, he will dream about that tonight. Only in his dream she won’t have clothes on. And if he doesn’t dream it, half the boys in the crowd will. Wake up dads. You know this.

Manly gentleness is not an epidemic in our culture. Rap videos, brutal movies, fatherless homes, and military madness have already made thousands of women the victim of man’s abuse. Now we would make the high school version of feministic nature-denial a partner in this undermining of masculine gentleness.

When the apostle of Jesus tells us to live with our wives “in an understanding way, showing honor to the woman as the weaker vessel” (1 Peter 3:7), he dumps a truckload of wisdom that fathers should build into their sons.

There is a way to honor a woman. That’s our job as men. This honor “understands” something. It understands that women are the “weaker vessel.” This has nothing to do with less personal worth and in many cases not even with physical stamina. It has to do with pervasive realities that shape the way healthy societies work.

It means that we should raise sons to think of themselves as protectors. Tell them they should lay their lives down to protect girls. Help them know that God designed them to grow up to be a picture of Jesus in their marriage. Nurture the instinct of a boy to fight for girls not against them.

I just watched a wrestling instructional video on line, illustrating some basic moves for the takedown and pin. These two guys are pressing and pulling on each other with unfettered and total contact. And it isn’t soft. It’s what we do not allow our sons to do to girls.

Okay, dads, here’s what you tell your son. You say, “There will be no belittling comments about her being 'a girl.' There will be no sexual slurs. If you get matched with her, you simply say to the judges, ‘Sir, I won’t wrestle a girl. My parents have taught me not to touch a girl that way. I think it would dishonor her. I hope you will match me with a guy. If not, I am willing to be disqualified. It’s that important.’”

Be a leader, dad. Your sons need you. The peer pressure is huge. They need manly restraints. They know this is wrong. But then they look around, and the groundswell of conformity seems irresistible. It will take a real man, a real father, to say to his son. “Not on my watch, son. We don’t fight women. I have not raised you that way.”