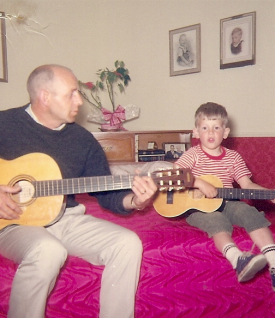 Today we are burying my father, Marlin Bloom. He died at 8:16 PM on July 8th, just days short of his 78th birthday. Having battled numerous health issues over the years, his body simply wore out. Dad’s wish was to be cremated, and since my brother and his family were traveling to Asia just days after Dad died, we postponed the memorial service until they returned.

Dad was born July 19, 1932, to Elmer and Merle Bloom on a farm in central Minnesota. But he spent most of his growing-up years in Stubb’s Bay, about 20 miles directly west of Minneapolis. He was the 3rd of 5 children, a natural athlete, had an easy-going manner, a contagious laugh, and a winsome smile.

He graduated from Wayzata High School in 1950, served in the Navy during the Korean War, and in 1954, married his high school sweetheart, Marilyn (they were voted “cutest couple” by the class of ’50). Following his naval service they settled into a modest rambler in a working class neighborhood west of Minneapolis, raised six children (I’m the 5th) and cared for numerous foster children. And they were active members at Wayzata Evangelical Free Church for 50 years.

For most of my childhood, Dad worked as a route driver for Emrich Baking Company, delivering baked goods to area restaurants and hospitals. A few times during school breaks, when I was ten or eleven, I got up with him at 2 AM, we drove through the dark downtown to the bakery, I helped him load the truck, and spent the day with him riding his route (and eating doughnuts!).

Very few things are as wonderful as the smell of a bakery in the early morning and spending the day with a father you deeply love and admire.

In the mid-70’s, Dad experienced a spiritual renewal. His faith in Jesus became more vibrant. He studied the Bible. He took more spiritual leadership in the family. He was happier. He seemed to have a deeper keel. This had a profound impact on me as a child.

Then, at age 47, affliction struck hard. Throughout Dad’s adulthood, there had been periodic brief seasons of unexplainable behavior. This normally kind, honest, patient, and hard-working man said and did things completely out of character. But in the fall of 1979, he lost control and had to be hospitalized. It was then that Dad was diagnosed with bipolar disorder.

Life is hard. There are so many ways we suffer the affects of the fall. Brains can be defective just like hearts, hands, legs, and livers can be defective. Mental illness has its unique kind of suffering and humiliation. And the medications took their toll. Dad was never quite the same again. His energy and interest levels were significantly limited.

But I never heard Dad complain. If he struggled with self-pity I didn’t see or hear it. The darkness he experienced was beyond description. I know he fought the temptation to end it all. He did not surrender. And he did not reject or express anger toward God because of his affliction. While his health permitted, he continued faithfully to attend his local church.

But one of the most beautiful things I have had the privilege to witness in my life was the faithfulness of my father and mother to each other through it all. Both suffered due to Dad’s illness, each in different ways. Life and marriage did not turn out like they envisioned in 1954. Many marriages shatter over far less than they endured.

But they stayed together and loved each other, which at times called for significant resolve, desperate prayers, and deep faith in Jesus. Mom in particular lived out a beautiful sacrificial love for Dad, tenderly caring for him until death parted them. It was a wonder few could see; a treasure undervalued by many.

And thank you, Heavenly Father, for all the lavish grace you have poured on me through my father’s life and example. I don’t understand all that you ordained for him to endure, but you have taught me to trust you and your promises more than my perceptions. And Dad was a part of that. And that is a priceless gift.