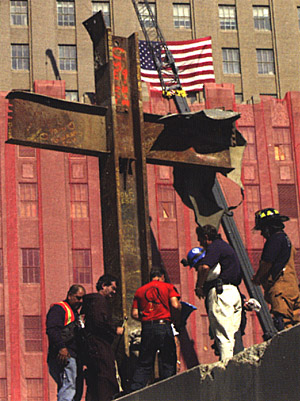 The abundance of suffering in the world is plain from the experience of man and from the word of God. And at the center of suffering is the cross of Christ — both in New York and in the Bible. On September 11 last year, 2,823 people died in the collapse of the World Trade Towers. And on that day, at least 35,000 people died of starvation. Eight months earlier, near Bhuj, India, 20,005 people died in the deadliest earthquake of 2001.

We know this sad story from experience and from God’s word. Not only does the Bible describe a flood that wiped out the earth’s population, and battles where 100,000 and 185,000 men perished (1 Kings 20:29; Isaiah 37:36), and an epidemic that killed 70,000 Israelites (2 Samuel 24:15), and coming wars and earthquakes and famines (Matthew 24:7), but it also describes the origin of these calamities. “Sin came into the world through one man, and death through sin, and so death spread to all men because all sinned” (Romans 5:12).

This does not mean that there is a direct correlation between specific personal sins and a person’s suffering and death. The best people often die hard, and the worst die easy. It means that sin is more repugnant in the universe than suffering and death, and that God subjects the world to the futility of natural dysfunction and moral collapse to show us the horror of sin and point us to the Savior he has sent. This is the meaning of Romans 8:20, “The creation was subjected to futility, not willingly, but because of him who subjected it, in hope.”

Surely, in God’s minute and merciful providence, the steel cross standing erect in the rubble of the World Trade Towers is a reminder that “we do not have a high priest who is unable to sympathize with our weaknesses, but one who in every respect has been tempted as we are” (Hebrews 4:15). In other words, when God subjected the world to futility, he had in mind to send his Son into that very futility to rescue people for everlasting joy.

Christ’s torture and sufferings were excruciating. The Romans had devised no worse punishment than crucifixion. That’s what God chose for his Son (Acts 2:23; 4:27–28), and the Son willingly embraced it (Mark 10:45). It was sin that put Jesus to death: “the Lord has laid on him the iniquity of us all” (Isaiah 53:6). Therefore, the sins that brought down the World Trade Towers were the sins that put Jesus on the cross. That is what we saw in the great steel cross rising from the wreckage in New York. Sin caused the collapse and sin caused the cross. It was a gift to the world that God ordained a rugged cross to stand in the ruins of September 11.

Yes, the sovereignty that carved and stood the cross could have stopped the calamity. But the designs and purposes of God are unfathomable. “How unsearchable are his judgments and how inscrutable his ways!” (Romans 11:33). Someday the curse will be lifted, but not yet (Revelation 21:4). For now, everyone suffers and dies. The hope God gives is not escape from, but triumph in, suffering. “Who shall separate us from the love of Christ? Shall tribulation, or distress, or persecution, or famine, or nakedness, or danger, or sword?” (Romans 8:35). The answer is nobody and nothing. “In all these things we are more than conquerors” (Romans 8:37). The cross of Christ calls us to suffer and secures our triumph. Suffering is certain. Salvation is sure. And the cross makes all the difference. Oh, that every American would say, “Far be it from me to boast except in the cross of our Lord Jesus Christ” (Galatians 6:14).