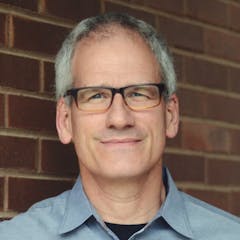 Bob Kauflin is director of Sovereign Grace Music. He equips pastors and musicians in the theology and practice of congregational worship and serves as a pastor at Sovereign Grace Church in Louisville, Kentucky. He is the author of True Worshipers: Seeking What Matters to God. Bob and his wife, Julie, have six children and a growing number of grandchildren.

The Soundtrack of Heaven

Worshiping the Infinite and Intimate God

Bob Kauflin is director of Sovereign Grace Music. He equips pastors and musicians in the theology and practice of congregational worship and serves as a pastor at Sovereign Grace Church in Louisville, Kentucky. He is the author of True Worshipers: Seeking What Matters to God. Bob and his wife, Julie, have six children and a growing number of grandchildren.

The Soundtrack of Heaven

Worshiping the Infinite and Intimate God

The ending of the Psalter explodes with instrumental praise. Lutes, harps, tambourines, strings, and pipes are all called into service of God’s glory. In our day, it’s pianos, electric and acoustic guitars, brass, strings, wind instruments, synths, organs, and multiple kinds of percussion. All can be employed in responding to God’s word, worthiness, and works.

One might almost think that means the more instruments, the better the worship — but that can’t be true. Not every church has the people or resources to utilize multiple instruments. Some make do with a single piano or guitar. Some don’t even have that.

But one instrument is common to every church, big or small. And happily, it’s the instrument God is most concerned about on Sunday mornings: the voice of the congregation.

That reality doesn’t negate the valuable contribution other instruments can make to our singing. But we’re to see them as useful, not crucial. They’re meant to complement and support our voices, not replace them.

We Lift Our Voices

As to the Psalms, it’s worth noting God didn’t give us a backing instrumental track to accompany them. He only provided lyrics. Of course, many Psalms contain musical annotations, as well as commands to play instruments. But God is evidently more concerned about the words we use to praise him than the music we set them to.

Everyone in the church — pastors, leaders, tech teams, and of course, those who sing — can contribute to prioritizing the congregation’s voice. Here are some ideas on how we can work together towards that end, first for church members.

You may not be involved in the formal music ministry of your church, but you still play a vital role, in at least four ways.

Prepare. Good instrumentalists plan, practice, and rehearse for Sunday mornings. As a member of the congregation, you may not do vocal warm-ups on the way to church, but you can prepare your heart.

Rather than waiting for the music on Sunday to move you to worship, spend time Saturday night or before the meeting reflecting on the lavish mercy God has shown us in Christ. In the midst of our rebellion, God graciously sent his Son to receive the punishment we deserved, so that we could be forgiven, justified, and adopted into God’s family. Every promise of God is assured for us in Jesus Christ. How can we not want to sing?

Participate. It may be obvious, but the congregation will be heard more clearly if everyone sings. It would be odd if the members of a band held their instruments and never played a note. In a similar way, it makes no sense when we stand silently in the midst of a singing congregation.

I have told the glad news of deliverance in the great congregation; behold, I have not restrained my lips, as you know, O Lord. (Psalm 40:9)

Look around. Engage with others by occasionally making eye contact as you sing. Acknowledge that you’re doing this together and you’re glad about it!

Receive. Often on a Sunday, I’ll stop singing for a moment and let the sound of others proclaiming God’s truth wash over my soul. When God instructs us about music in the church, we’re told to “address one another” and to “teach and admonish one another” (Ephesians 5:19; Colossians 3:16). That’s right in line with what Paul writes in 1 Corinthians about doing everything to build up those around us (1 Corinthians 12:7; 14:5, 12, 26). Listening to others sing around me is a powerful means of grace and edification.

It’s not uncommon to think of “getting lost” in the sound of synth pads and ambient guitar patches during a service. But that’s foreign to the New Testament. We’re called to let the word of Christ dwell in us richly, not musical experiences.

Encourage. Take time to commend your music leaders and musicians. Thank them for a particular song they chose. Tell them how God has used the songs they lead to help you think more clearly about God and strengthen your faith. Express your appreciation for those around you who sing loudly, boldly, joyfully, and faithfully. Especially encourage those who display God’s grace by singing songs of faith, trust, and joy in the midst of sorrows and trials.

If you’re responsible for planning or leading the songs in your church, there are a number of ways you can hinder or help your people’s singing.

Teach on the value of the congregation’s voice. Whether it’s through regular comments on Sunday, or a full sermon, the church needs to understand what musical sound is most important to God. Help them see that hearty singing is necessary for edification to take place. Consider starting with a “call to worship” to root their singing in God’s revelation and commands.

Monitor the volume of the musicians. Sometimes, a band is so loud that people have a hard time hearing the person next to them, much less the sound of the congregation. In other situations, the band and leader are so soft that people with shaky, awkward, not-so-in-tune voices fear singing out. Adjust the loudness of the instruments to be soft enough for the congregation to hear itself, but loud enough to give confidence and direction.

Choose keys and ranges to serve the congregation. When leaders choose a key for a song because they “sound better in that key,” they’re serving themselves, not their congregation. Church members don’t attend the service to listen to a soloist. At least they shouldn’t. But they’ll tend to become spectators if they have to strain every time they sing.

Simplify your arrangements. When the sound from the instruments is constant and dense, it can leave congregations feeling like they have nothing to offer. Similarly, a band that sounds professional and polished can tempt people over time to be more in awe of external trappings than eternal truth. Try using fewer instruments. Vary what and when they play. And if you use in-ear monitors, make sure you can still hear the congregation.

Turn the lights up. Though some people feel more “comfortable” and less distracted with the lights down low, a dark room unquestionably leads to thinking the most important things are happening on the platform. It also makes it more comfortable to check out.

Be intentional about singing a cappella. Many congregations don’t know they’re the primary instrument on Sundays because they never have an opportunity to hear themselves alone. If your church sings less confidently when the instruments drop out, it’s a sign they think the band is more important than they are. Try including two or three moments of a cappella singing every Sunday. That regular practice reminds the church we’re there to support them, not the other way around.

Limit instrumental sections. When people constantly have to stop singing as the musicians play, it can be hard to stay connected to the truths they’re singing. Better options include starting a song with a brief intro, cutting instrumental sections short, or ending songs on the last note the congregation sings rather than playing the obligatory instrumental ending.

Making the congregation’s voice the main instrument in our gatherings benefits us in at least five ways.

First, it enables us to flesh out the commands of Ephesians 5:19 and Colossians 3:16. We understand better that we are not only singing to God, but to each other. We become more aware that we’re being counseled by those around us.

Second, appreciating the value of the congregation’s voice makes our meetings less about performance and more about participation. Less about being impressed and more about being involved. It helps us see that musicians are one part of the body, not separate from it. We are all being led by our great high priest, Jesus, who perfects all our offerings of praise to the Father (1 Peter 2:5).

Third, highlighting the role of the congregation increases our awareness of what each of us brings to build up the church. Typically, when someone asks, “How was worship?” they’re referring to what the musicians did. Ignoring for a moment that “worship” means much more than singing on Sundays, congregational worship is primarily about what the congregation does, not the musical leaders. So the quality of “worship” is determined by the enthusiasm, participation, engagement, and expression of the people.

Fourth, prioritizing the congregation’s sound makes our songs less dependent on fantastic musicians and more dependent on faith-filled hearts. We can be grateful for churches that have amazing instrumentalists that serve their churches with excellence every week. But let’s be honest. The vast majority of churches have average musicians. Hopefully getting better all the time, but still not professionals. But that doesn’t have to affect the sound of individuals whose eyes and hearts have been opened to the glories of the Savior.

Finally, seeing the congregation as the main instrument on Sundays expresses our unity more clearly. There is no dividing line between the musicians and the people, or the pastors and people. We are the body of Christ, made one through his blood, joined together in the Spirit, called to “live in such harmony with one another, in accord with Christ Jesus, that together [we] may with one voice glorify the God and Father of our Lord Jesus Christ” (Romans 15:5–6).

May it be increasingly so in our churches, for the glory of the Lamb whose song we’ll be singing through endless ages.