It was the summer of 1998. I was leading a private camp and awaiting the arrival of my assistant. She arrived with her blonde ponytail, blue eyes, and bubbly spirit. She was a few years younger than I — and seemed it. Not that she was immature, she wasn’t, but there was innocence about her that poured out as she spoke and interacted with the campers. Our first meeting would be God’s way of changing the whole course of my life.

That girl was Elizabeth Plewniak (Moore at the time). She and I were polar opposites. I was black and she white. I was in college and quite academic and she had decided to leave college early to do campus ministry. Later I would find out that she came from a fairly wealthy family and I was poor (we would have been considered poor to lower-middle class). Most importantly, she was a Christian and I was not.

Growing up I only attended church on major holidays. When I did find a church my junior year in high school it didn’t end so well. I ended up falling for an unbeliever and left the church. That wasn’t the only reason, I was also aware that there wasn’t something quite right with the doctrine. Nevertheless, I said goodbye to church and vowed never to return. I didn’t want to have anything to do with organized religion.

But that was not God’s plan.

A Roommate of Faith

So here I found myself in an odd series of events that only God could ordain, rooming with a Christian girl during a private camp. Our first night of camp she plopped down on the bed and broke open her Bible.

I was seated on the adjacent bed wondering if she would mind if I turned on the television as she began to read to herself. When I glanced at her I could feel the blood rush to my face. My guard immediately went up and I spoke frankly, “What are you doing?” All I could think was what she might say to me.

It took me some time before I would visit her church. Elizabeth and I would meet together every now and then; but finally in the spring of 2000, after a broken engagement and humiliation over my sin, I came to her church and I stayed.

The Gift That Gives

I remember it like it was yesterday. It was a Sunday morning and I hadn’t been back to this church in possibly a year. While singing the worship song “Rock of Ages” the Lord began to soften my heart and reveal His grace to me. After the meeting Elizabeth and two friends (Paul and Carrel) prayed for me. And I was saved.

I recall later reading Ephesians 2:8–9: “For by grace you have been saved through faith. And this is not your own doing; it is the gift of God, not a result of works, so that no one may boast.” The Lord revealed that He saved me not by my works or anything I had done or anything I could ever do but by His grace, His free gift, His own power!

What struck me about my friend Elizabeth was that she wasn’t at all concerned that I was black and older and the leader of the camp. None of that mattered to her. She admits intimidation but not because of my race or ethnicity.

In her own words: “When I met my friend Trillia, I was very intimidated by her, but I don’t think it was because she was black and I was white. I was more attracted to her because she was black. I don’t know if it was common grace or a work of God in my heart. My mother raised me with a value of loving diverse people. I saw black people as very attractive and desirable and gifted in ways that I’m not, and that attracts me to them and I’m just curious about their life and culture. That’s something I’m drawn to.”

Her curiosity led her to become my friend in 1998. But it isn’t what led her to share the gospel with me.

“Trill and I kept getting put on the same jobs and I was totally in faith that this was the Lord’s doing,” Elizabeth told me recently. “Sharing the gospel with her and challenging her on her faith — that was difficult because my flesh was seeking to please her and impress her. But I did feel like the Lord was leading me to do that, to love her in those ways.”

Motivated by love she shared the gospel with me and the course of my whole life was changed — forever. The outcome could have been different. My friend Elizabeth could have hesitated because of our perceived and obvious differences. Sharing the gospel can be scary enough without throwing clear differences in the mix.

But it is genuine, Spirit-filled love for the soul of another that can overcome all the natural oppositions to sharing the gospel. I believe the motivation for that love comes from our own salvation experience. God drew us out of the pit to salvation. We were not seeking God. We love God because he first loved us (1 John 4:10). And we love others, through the proclamation of Jesus Christ, because God lavished that same love on us (2 Corinthians 5:14, 1 John 4:19).

And it is his example of love that transcends all others.

Christ continually throughout the New Testament related to people who were different from him, be it tax collectors or Samaritans (who were hated by the Jewish people and vice versa. See John 4:9, John 8:48 and Luke 9:51–56). He was bold to share, bold to the point of death on a Cross, bold to his own death because of his love for souls. And with his death came his Spirit, poured out on us to witness to others (Acts 1:8).

God does as he pleases and can use our stumbling speech. Even Paul didn’t share the gospel with eloquent verbosity: “For Christ did not send me to baptize but to preach the gospel, and not with words of eloquent wisdom, lest the cross of Christ be emptied of its power” (1 Corinthians 1:17).

“For I am not ashamed of the gospel, for it is the power of God for salvation to everyone who believes, to the Jew first and also to the Greek” (Romans 1:16).

And this is true love — a love that shares the race-transcending gospel. 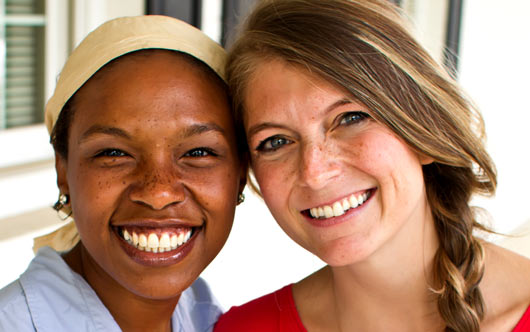