‘What Punishments of God Are Not Gifts?’ 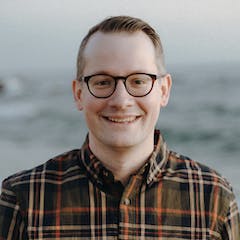 Marshall Segal is a writer and managing editor at desiringGod.org. He’s the author of Not Yet Married: The Pursuit of Joy in Singleness & Dating. He graduated from Bethlehem College & Seminary. He and his wife, Faye, have three children and live in Minneapolis.

How to Fail a Wife

Why Don’t We Have Good Friends?

You Will Be Breathtaking

Marshall Segal is a writer and managing editor at desiringGod.org. He’s the author of Not Yet Married: The Pursuit of Joy in Singleness & Dating. He graduated from Bethlehem College & Seminary. He and his wife, Faye, have three children and live in Minneapolis.

How to Fail a Wife

Why Don’t We Have Good Friends?

You Will Be Breathtaking

“‘What punishments of God are not gifts?’ Do you really believe that?”

Anderson Cooper recently interviewed Stephen Colbert, but the forty minutes were unlike any of their previous conversations on camera. In a far less formal room backstage, the two went where personalities like theirs so rarely go: grief. Having lost their fathers young, both at the age of only ten, they waded together back into the pain and talked personally about the weight and purpose of loss and suffering.

Cooper, 52, is an American journalist and television personality, who anchors the nightly CNN show Anderson Cooper 360°. Colbert, 55, took over for David Letterman in 2015 as host of The Late Show on CBS. For as much as America has seen of these men over the years, we see a different side of them in this new conversation.

Colbert is the youngest of eleven children. Two of his siblings, Paul and Peter, the two closest to him in age, died with his father, James Colbert, Jr., in a plane crash on September 11, 1974. That was the day they lost “Dad and the boys,” leaving ten-year-old Stephen alone at home with his mother, Lorna. (The older children had already grown up and moved out.)

When asked about his mother, and how she endured the tragedy, her son says, “It had to do with love, and it had to do with her loving God. . . . Her example of her faith stays with me.” A feature article in GQ summarizes Colbert, “He has said this before — that even in those days of unremitting grief, she drew on her faith that the only way to not be swallowed by sorrow, to in fact recognize that our sorrow is inseparable from our joy, is to always understand our suffering, ourselves, in the light of eternity.”

Anderson Cooper’s mother, Gloria Vanderbilt, died earlier this summer, on June 17. His grief only added to the long-standing heartache of losing his father, Wyatt Cooper, during open-heart surgery more than forty years ago, and then his brother, Carter, to suicide ten years later. When Colbert heard of Vanderbilt’s passing, he wrote Cooper a letter, in which he says, “I hope you find peace in your grief.” That is where the twenty most poignant minutes of the interview began.

Can ‘Punishments’ Be Gifts?

The interview gives anyone a lot to think about, but the conversation climaxes, with tears, when Cooper pauses and then quotes Colbert from that remarkable 2015 interview in GQ: “What punishments of God are not gifts?” After a painful second or two, he asks Stephen, “Do you really believe that?”

What makes this kind of suffering and loss a gift? Colbert tries to explain, “We’re asked to accept the world that God gives us. And to accept it with love. If God is everywhere, and God is in everything, then the world as it is is all just an expression of God and his love. And you have to accept it with gratitude. . . . You have to be grateful for all of it. You can’t pick and choose what you’re grateful for. So, what do you get from loss? You get awareness of other people’s loss, which allows you to connect with that other person, which allows you to love more deeply and to understand what it’s like to be a human being, if it’s true that all humans suffer.”

Later in the interview, he says, “What’s the point of being here and being human if you can’t be the most human you can be? . . . I want to be the most human I can be, and that involves acknowledging and ultimately being grateful for the things that I wish did not happen, because they gave me a gift.” Colbert eventually returns to the line Cooper quoted to say that it was from a letter by J.R.R. Tolkien.

What Does Tolkien Say?

In October of 1958, Tolkien wrote a letter to a Miss Beare, an inquiring reader who had a host of peculiar and specific questions about “The Lord of the Rings.” In a follow-up letter (actually just a draft of a letter that was never sent), Tolkien pens the paragraph that so impacted Colbert. Writing about the immortality of Elves and mortality of Men (a mortality the Elves coveted), Tolkien says,

A divine “punishment” is also a divine “gift,” if accepted, since its object is ultimate blessing, and the supreme inventiveness of the Creator will make “punishments” (that is, changes of design) produce a good not otherwise to be attained. (The Letters of J.R.R. Tolkien, 286)

Therefore, a man who is subject to death and suffering and loss (like Tolkien, Colbert, and each of us) is to be envied for the precious good we receive because of the “punishments” we receive (the consequences of sin, the awful “changes” to the original design brought about by the fall). Tolkien goes on to say, “A ‘mortal’ man has probably (an Elf would say) a higher if unrevealed destiny than a longeval one” — that is, than an Elf who never dies.

The loss of a father, or mother, or brother, or child, then, as much as we would never want it, or ask for it, can be a gift, if accepted, says Tolkien, because it can bring about a greater good, an ultimate blessing we would not have enjoyed without having to feel the pain and heartache.

What Does God Say?

As painfully close as Colbert seems to be to the Truth, he very well may be a Middle-earth away. He does say about our experience of loss and suffering, “In my tradition, that’s the great gift of the sacrifice of Christ, is that God does it too, that you’re really not alone. God does it too.” But later, when Cooper asks why Colbert doesn’t call others to follow Christ, he demurs, giving very pluralistic answers about God and faith, heaven and hell.

Regardless of what Colbert (or Tolkien, for that matter) says, what does God himself say about the pain, suffering, and loss we all inevitably experience? The world will not call any kind of pain “love.” The vast majority of modern people simply do not have categories for God doing whatever necessary, however tragic, painful, or heart-wrenching in the moment, to draw us to himself, to give us “a good not otherwise to be attained.”

Those shaped deeply by the Scriptures know, however, that the lavish love of God for us often hurts in this life. The prophet Hosea declares, “Come, let us return to the Lord; for he has torn us, that he may heal us; he has struck us down, and he will bind us up” (Hosea 6:1). If we have been found in Christ, the tearing of God is not to undo us, but to heal us.

Hebrews says, “My son, do not regard lightly the discipline of the Lord, nor be weary when reproved by him. For the Lord disciplines the one he loves, and chastises every son whom he receives” (Hebrews 12:5–6). If our life did not hurt, acutely at times, then we would have missed out on fatherly love. Whoever God loves, he disciplines, without exception. He chastises every child he receives. Therefore, for those who love God, all our pain comes through his loving hands to lead us to deeper reservoirs of joy.

There is nothing which shows our ignorance so much as our impatience under trouble. We forget that every cross is a message from God, intended to do us good in the end. Trials are intended to make us think — to wean us from the world — to send us to the Bible — to drive us to our knees. Health is a good thing; but sickness is far better, if it leads us to God. Prosperity is a great mercy; but adversity is a greater one if it brings us to Christ. Anything, anything is better than living in indifference and dying in sin. (Matthew, 130–131)

Sometimes the love we need most is the love we want least. The love feels so harsh, so blunt, so unpleasant in the moment that we don’t even recognize it as love. That’s only because we can’t see everything God sees. Behind the real pain he allows is an even more real love for those for whom he sent his Son to die (John 3:16). Would we ever run to Jesus if we never experienced suffering and loss?

‘The Thing I Most Wish Didn’t Happen’

Colbert stands out from the stand-up characters we know, a true enigma among comedians. He doesn’t fit the mold, and what he’s said about grief is every bit as unusual. He told GQ, “That might be why you don’t see me as someone angry and working out my demons onstage. It’s that I love the thing that I most wish had not happened” — a quote that baffles Cooper.

I’m very grateful to be alive, even though I know a lot of dead people. . . . That impulse to be grateful wants an object. That object I call God. Now, that could be many things. I was raised in a Catholic tradition. I’ll start there. That’s my context for my existence, is that I am here to know God, love God, serve God, that we might be happy with each other in this world and with him in the next — the catechism. That makes a lot of sense to me.

As Cooper listened to Colbert, he remembered something his mother used to say: “One of the things my mom would often say is that ‘I never ask, Why me? Why did this happen to me?’ She would always say, ‘Why not me? Why would I be exempt from what has befallen everybody?’ . . . Of course, why not me? This is part of being alive — suffering, sadness. . . . You can’t have happiness without having loss and suffering.”

Two men, grieving on the cliff of eternity, seeing brilliant glimpses of reality, and yet seeming to reject the gift of God in their suffering, the happiness that eclipses every other, the ultimate blessing: God himself in Jesus Christ. I, for one, have prayed that God would grant them both repentance and joy leading to a knowledge of the truth.

There is peace to be found, but a vague sense of “good” cannot compare to all we have in Christ. I hope you find his peace in your grief.