D.A. Carson is emeritus professor of New Testament at Trinity Evangelical Divinity School in Deerfield, Illinois. He is a founding member of The Gospel Coalition, and the author of How Long, O Lord?

Who Will ‘Stand in the Gap’?

How Do We Know Jesus Is the Messiah?

There Is No Future in Frustration

What Sexual Theft Says About You

The Benedict Option and American Politics

Christ Reigns over All: Biblical Survey of God’s Kingdom 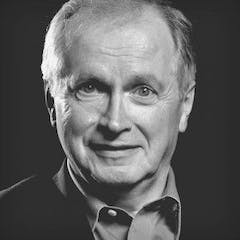 D.A. Carson is emeritus professor of New Testament at Trinity Evangelical Divinity School in Deerfield, Illinois. He is a founding member of The Gospel Coalition, and the author of How Long, O Lord?

Who Will ‘Stand in the Gap’?

How Do We Know Jesus Is the Messiah?

There Is No Future in Frustration

What Sexual Theft Says About You

The Benedict Option and American Politics

Christ Reigns over All: Biblical Survey of God’s Kingdom

We are back one more time with guest Don Carson, and one thing that impresses me about you is your eagerness to share the gospel on college campuses. Given the difficulty of communicating biblical truth to postmoderns, here’s my question: Is it possible to explain original sin to an audience of non-Christian college students without appealing to biblical evidence? How would you do it? Where would you begin? And do you sense this challenge yourself?

The hardest thing to get across at a university campus today is the nature of sin, by far. If you start talking about the Trinity or the incarnation or the resurrection of Christ, and you explain what you mean as best you can in the time you have, then the people who are biblically illiterate there will say, “Oh, is that what Christians believe? Wow, that is pretty weird.” But yes, they understand what you are saying, and they are not going to push back on it particularly. The people who ask the hardest questions at those sorts of meetings are not the non-Christians — they don’t know enough to ask the tough questions — but the Christians who show up and then try to use that forum to get their theological questions answered, which is not the best forum.

But if you start talking about sin and evil then you get immediate pushback. To my mind, one of the best ways of tackling that is to begin with idolatry. Idolatry involves betrayal. It involves the “de-godding” of God. Begin with the Bible’s storyline that God made us. And because he made us, therefore we owe him. And to think that we don’t owe him is already betrayal. He knows what is best for us. We want sin portrayed, first of all, as an insult to God, as the de-godding of God, as the erection of other gods as a form of selfishness.

I find that many biblically illiterate, contemporary twenty- or thirty-somethings can understand and sympathize with idolatry. They might not agree with you, but they understand it as a category more quickly than sin as transgression of law.

Now obviously in a full-orbed biblical doctrine of sin, sooner or later you have to talk about idolatry, and the fall, and the transgression of law, and a bunch of other categories too: falling short of the grace of God, of the glory of God — and many other things. But if you are talking about a place to start, then what I often do is start with the nature of idolatry and show how idolatry involves not only loving bad things, but loving good things to the point that they become god for you, because that is betraying God, and that is making a false god. That means your heart is following something that should not claim ultimate value.

And so to begin, I have often preached Genesis 3 at university campuses, and the people who give me most stick for it are rarely the non-Christians. They see the point right away. Sometimes it’s the Christians who want me to answer all of their technical questions and who miss the big storyline. So that is where I go.

Ultimately, if you have enough time in the context of a local congregation where you have both Christians and non-Christians and so on, then you have got to unpack sin in its many, many different dimensions. It is helpful, too, to give some books to people. Cornelius Plantinga’s Not the Way It’s Supposed to Be, for serious readers, is not a bad place to begin. The book of essays edited by Robert Peterson and Christopher Morgan called Fallen is not a bad place to begin as well if you are dealing with people who are serious readers. But for people who are biblically illiterate, those books are usually too advanced, and in my view, it is better to start off with Bible studies that get people into the text and see how the texts portray the glory of God himself.