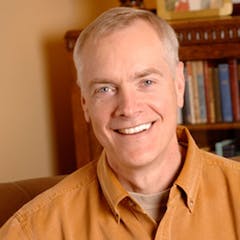 Ray Ortlund is president of Renewal Ministries and a council member of The Gospel Coalition. He founded Immanuel Church in Nashville, Tennessee, and now serves from Immanuel as a pastor to pastors.

Your Ministry Will Take a Lifetime

Stop Loving Your Spouse Too Much

God Will Renew Your Joy in Ministry

Make It Easy for Your Kids to Love God

Rejoice in the Wife of Your Youth

Ray Ortlund is president of Renewal Ministries and a council member of The Gospel Coalition. He founded Immanuel Church in Nashville, Tennessee, and now serves from Immanuel as a pastor to pastors.

Your Ministry Will Take a Lifetime

Stop Loving Your Spouse Too Much

God Will Renew Your Joy in Ministry

Make It Easy for Your Kids to Love God

Rejoice in the Wife of Your Youth

We are back one last time with author and pastor Ray Ortlund. Ray, when you think about your church in Nashville, what is the vision you send them out with into the world? What’s your vision of a local church sent out into a world hostile to Christ? What do seek to instill in them?

I don’t try to instill in them an angry determination to go and defeat our city and defeat our nation and the political purposes of others. I just don’t see that as God’s calling upon us, but, instead, Jeremiah 29:7 says: Seek the peace of the city where I have sent you into exile. And that city was Babylon. It was not a nice place. It was infested with idols. But God is saying in that verse: I want you to live there. I want you to settle down there. Don’t try to run away. I don’t want you to be escapist. And bring my peace into that city. I am going... I am going to give you an address in the suburbs of hell and I want you to create beauty for my glory and for their benefit in that hard place.

So for us, Tony, for Janni and me, one thing it means is we have the privilege of having in our home someone as a long term guest in our home someone who has been very seriously mistreated and is beginning to put her life back together again. This person does not know the Lord. This person has suffered. And I cannot tell you how joyful it is to us, how we feel we are the ones receiving the gift, as we want to bring into an environment of peace someone who really needs another chance at life. So I am not... you know, in his wonderful book, Tony, The Church at the End of the 20th Century, Francis Schaeffer has a chapter in there entitled, “Revolutionary Christianity” in which he talks about throwing our homes open. He painted the picture in his own home there in Switzerland how as they opened their home with radical community all their wedding gifts were broken and torn and so forth. People burned holes in the carpet with their cigarettes. People threw up on the carpet. Well, that is actually a privilege. It is a privilege to give people place in our reality for Jesus’ sake and to show them a love they don’t even believe exists. And if they can’t see it, how can they believe it?