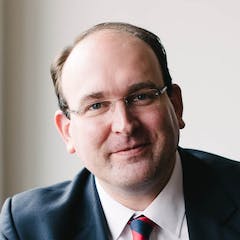 Historian Michael Reeves joins us again from the UK, filling in this week for John Piper. Michael, praying to Mary is a striking phenomenon in the Roman Catholic Church, striking to us Protestants. Even in the most recent Catechism, the Vatican continues to spell out the value and importance of liturgies and feasts and prayers dedicated to Mary. So how did this practice develop over time? Why do Catholics pray to Mary?

Okay, there are really two parts to the story. And the first part starts very well. From the very earliest days, the church and its theologians have taken Paul’s vision in Romans 5:12–21 of the two men Adam and Christ, who determine the destiny of all people to be a very strong dominant image in salvation. There are two men — Adam and Christ. And we all depend on one of them for our salvation. In Adam we all fell. In Christ those who are united to him are saved.

Now that became such a strong feature in the theology of the early church that people began to think, what is Eve’s place in this? It wasn’t just Adam who fell. It was Eve who fell as well. And so they began to see a man and a woman are the origin of our damnation. And to see a nice tidiness as this first Adam and a last Adam — according to Paul in 1 Corinthians 15:22 — some theologians started to play with the idea that there was a first Eve and a last Eve who would be Mary. And this began to develop very, very slowly into the idea that somehow Mary might be a co-partner in the work of salvation. And so Pope John Paul II was a believer in Mary as co-redemptrix, a redeemer alongside Christ, which, of course, goes directly against what you read in Acts 4:12: “There is no other name under heaven given among men by which we must be saved” — Jesus Christ.

“Some theologians started to play with the idea that there was a first Eve and a last Eve, who would be Mary.”

That was a theological trajectory. It didn’t do an awful lot popularly for praying to Mary until something else happened. So from AD 500 to 1500 or so, there was for various reasons a tragic decline in the knowledge of God. The gospel became increasingly cloistered. Knowledge of it became restricted to monasteries. People weren’t being well taught. And as the knowledge of God declined, so Christ receded into heaven. People felt they simply couldn’t approach him. They didn’t know of him as a savior. And so that being the case, if you can’t approach Christ as a compassionate and faithful high priest who will intercede for us, we need mediators between us and Christ himself.

So the thought grew: Well, if I can’t approach Christ, I will approach his mum who will put in a good word for me to Christ. And so people would begin to pray to Mary who would pray to Christ who would intercede with the Father. This actually started getting even stronger. Mary herself started acquiring this very exalted position as the Queen of Heaven and so people thought, I should pray to her mother to put in a good word with her, who will put in a good word with Jesus. And so the cult of Anne began, Anne being the mother of Mary. And if you read the story of Martin Luther you see this time when he is a young man, a law student, and he is knocked to the ground by a lightning bolt. The explanation that comes out of his mouth is: St. Anne, help me. I will become a monk. And Luther had never up to that age dared pray to God himself. He would only pray to saints — mediators between us and Christ.

And the other thing I think we see with Luther is because Luther felt he couldn’t love God — indeed, Luther said: I hated the righteous God who condemned sinners — you have to place your heart and your affections somewhere on someone who appears lovely. And since Christ didn’t appear lovely, what Luther said he and his fellow monks did is they placed their affections elsewhere on Mary and on the saints. Mary, this mother figure, seemed to have a compassion that Jesus didn’t. And that, I think, explains why if you talk, say, to an Italian Roman Catholic today you will often get a strong sense of how much it is not just that Mary is an important figure for them, but they love her. There is a real warmth of affection. And I think that, again, betrays that view that Christ is not a compassionate and faithful high priest. Therefore, you need someone who will do that job for him.

“As the knowledge of God declined, so Christ receded into heaven. People felt they simply couldn’t approach him.”

And so Hebrews 4:14–16 would be the theological response you would give to someone who was praying to Mary: Jesus is our “great high priest” and we can go directly to him.

I think that is absolutely right, because if I was simply to be disrespectful towards Mary, that is not going to be a productive way forward. But to say all the compassion and redemption that you are looking for in Mary is better found in Christ, I am not taking away anything from you. I am offering you a better gospel, a truer, more gracious God.