It’s the dark opening verse to a modern-day hymn that has become a classic to some, and a favorite to many, since its release in 2008. The song is titled “All I Have Is Christ,” and it was written by Jordan Kauflin, a pastor at Redeemer Church of Arlington, Virginia, and edited by his father, Bob Kauflin, the director of Sovereign Grace Music and pastor at Sovereign Grace Church of Louisville, Kentucky.

I recently asked Jordan and Bob some questions about the writing of a modern-day classic.

Jordan, what was the initial inspiration for “All I Have Is Christ,” and what process did you use to write it?

Jordan: As is often the case with me, the finished project was not what I set out to write! My brother Devon and I were working on songs for Looked Upon, an album that Sovereign Grace Music produced in 2008, and I was inspired to write a song that talked about the joy we have in Jesus that is greater than any joy in this world. That led me to try and describe the futility of our life without Jesus: “I once was lost in darkest night.”

I was also influenced by the last two verses in John Newton’s hymn, “Old Things Are Passed Away,” specifically the thought that if God had not loved us first, we would still be refusing his mercy.

Once I settled on the chorus words, I began a laborious process of crafting each line to tell the story of redemption and our response to it. My dad was really helpful in helping me shape the song. I would work on lyrics for a couple weeks, play them, and typically hear: “It’s good, but I think it can be better!”

The first line of the song came quick. Which lines proved more difficult?

Jordan: Two come to mind, the first is deciding on the lines of the chorus. I remember writing numerous ideas, all of them wordy, like:

My dad kept challenging me to make it simpler and simpler.

Finally, partly due to resignation, I finally said, “What about just saying it this way?”

The third and fourth lines of the third verse were a challenge as well. I wanted to communicate something of the complete dependence we have on Jesus, even as we respond in obedience to him, but I couldn’t come up with the right line. My dad suggested the idea that people should see that

The strength to follow Your commands
Could never come from me

It communicated exactly what I wanted to say.

Bob: Looking back over the original lines Jordan had been considering for the chorus, I’m so grateful he worked hard to trim it down. It was worth the investment to be able to joyfully sing out, “Hallelujah! All I have is Christ! Hallelujah! Jesus is my life!” and know that’s all we need to say.

[A page from Jordan’s journal showing the early lyrics.] 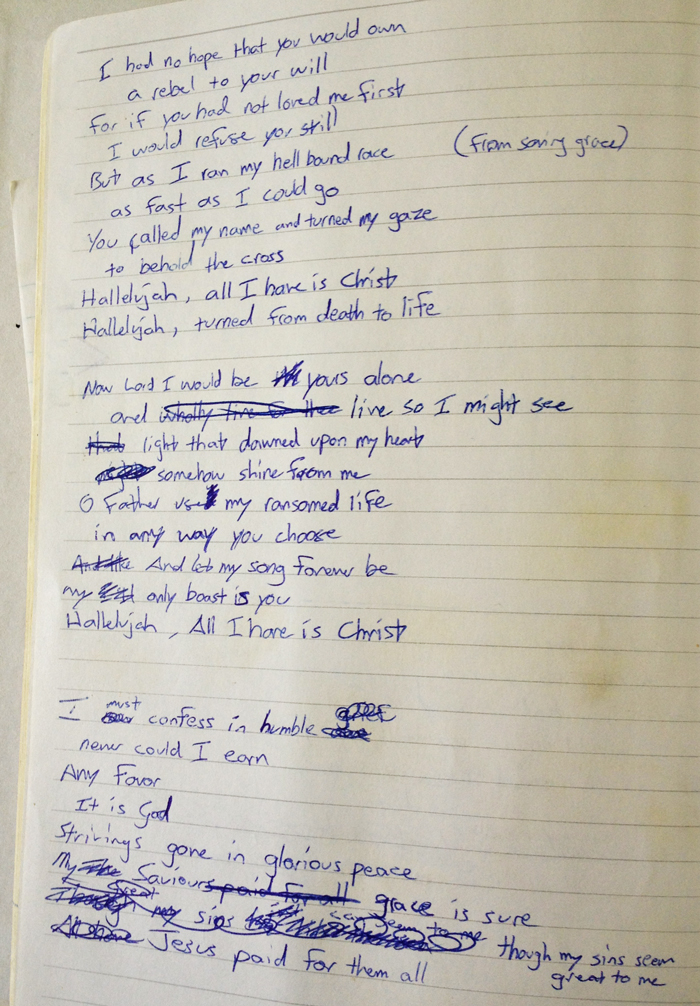 Bob: Yes, New Attitude 2008 was the first time we sang it outside a local church context. Until then it was only played in our home church.

So the song began to spread from church to church rather quickly. As it did, what was the early response?

Jordan: I thought I had written a decent song when the writing process was finally done. Nothing amazing. Decent. Then people began to communicate how deeply the song had ministered to them as they sang it, how it put into words their life story, and how it was becoming their favorite worship song — I was pretty amazed.

Funny enough, answering this for Desiring God, I remember very clearly sitting at one of the New Attitude conferences listening to John Piper speak, and he began his message by quoting the words to the chorus. As he filled out what the words truly meant, I remember thinking, “Wow. That’s really profound!” I’m glad that in the Lord’s wisdom, he helped me write words that I didn’t even grasp the significance of at the time.

Bob: When the song was done, I thought this is exactly the kind of song I want to sing and want others singing. Each line leads us in progression to the inevitable conclusion that our lives are nothing without Christ and his gospel. I suspected it wouldn’t be long before churches throughout the world were singing it.

Bob, from your perspective, what has been the effect of this song?

Bob: As I suspected, the song has quickly become one of the most well known songs Sovereign Grace Music has produced. On our website, we have versions of the song in Croatian, Chinese, German, Japanese, Korean, Russian, and Spanish, and we will probably have more in the near future.

I’ve lost track of the number of people who have told me it perfectly describes how God has worked in their life. And that’s appropriate because it’s the story of every Christian.

Yes, it has an “Amazing Grace” quality to its simplicity and way of encapsulating certain universal experiences of the Christian life. Jordan, as you look at the many ways God has used this track all around the globe, what has this taught you about how God uses your efforts for his glory?

Jordan: On numerous occasions, I have received emails from people that have asked for the inspiration and story behind the song. I typically tell this song is yet another example of how God uses our simple labors for his glory. There was no moment of inspiration, or incredible life story from which it flowed (although redemption is pretty incredible!). I didn’t set out to write a song that thousands of people would sing. I just wanted to be disciplined to finish a song — and frankly, it took a lot of hard work.

I still don’t know why God has chosen to use it to bless so many people. But I’m grateful. I’m grateful because it consistently reminds me of the beauty and joyful freedom of living in God’s kingdom. Our works and what we accomplish do not define us. But in his kindness he still uses our efforts.

Whether it blesses one person or millions, the same truth remains: Our boast is always and only in our Savior. As I live in the good of that truth, the more I can sing with joy and faith, Hallelujah, all I have is Christ!

Certainly there is one great takeaway here for every creator who is called by God to create hymns, poems, articles, sermons, and books. God uses our time investment, and the sweat of our revisions, for his own glory. The mental labor is often long and hard to make points clear and simple, but the fruit can be very sweet in the end.

Special thanks to Bob and Jordan Kauflin, the father/son duo behind the worship song “All I Have Is Christ.”