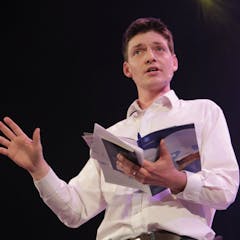 Glen Scrivener is an evangelist and author of several books, including 3 2 1: The Story of God, the World and You. Check out his resources at Three-Two-One.org. Glen also directs the charity Speak Life.

Where Is Jesus in the Old Testament?

Glen Scrivener is an evangelist and author of several books, including 3 2 1: The Story of God, the World and You. Check out his resources at Three-Two-One.org. Glen also directs the charity Speak Life.

Where Is Jesus in the Old Testament?

As a preacher who speaks largely to those outside the faith, I’m always returning to the subject of darkness. I find it to be a fearful topic of conversation, but also a fruitful one.

At Halloween, the whole world is thinking about “powers of darkness,” so let me share three sentiments about darkness that I often hear in my travels. And let me hold these common beliefs up to the light for a moment to see what they might tell us.

1. The Darkness Is Real

I hear this admission often, even from very secular people: “I’m not sure I believe in God, but I definitely believe in the devil.”

There’s something tangible about evil. There’s a thickness to it, a weight, a heaviness that sinks to the pit of your stomach. For some, even in spite of themselves, they begin to ascribe personality to it. We can experience an evil so outrageous, it goes beyond our biological, psychological, and sociological explanations. “We swear we’re not superstitious, we’re not, but . . . ” Faithful children of the Enlightenment — modern, scientific folk — then start speaking of personal evil and powers of darkness.

Every culture has words for this — thick concepts, developed beliefs, rituals too. Our culture is no different. All through the year we watch people dress up as grotesque monsters wreaking havoc upon civilized society. We call these grand pageants “horror films” or “slasher movies,” but whatever their name, they tap into the same realities.

Once a year, of course, the pageantry goes public — global even — with millions dressing up in macabre costumes. Halloween is the second-largest festival for retailers. What we spend on Halloween is only bettered by what we spend on Christmas. Each year we feel compelled to embody the forces we fear — some to mock, some to dabble, some for fun, some just because. Whatever the reason, Halloween is a powerful pointer to a truth we are otherwise wary of expressing: the darkness is real.

2. The Darkness Is Relative

We all — believer or not — feel the weight of this profound question: How can there be a God when there’s so much evil?

In the face of real evil, can we believe in ultimate good?

I once debated the chief executive of the British Humanist Association, Andrew Copson, on the motion “The Christian God is worthy of worship.” In opposing the motion, Andrew’s speech was almost entirely taken up with a discussion of parasites. He listed dozens of them and their horrific, life-sapping capabilities. Can there be a good God when he allows such killers in his creation?

My response was simply to press into the reality of parasites. What are parasites? They are secondary nasties that attach themselves to an original, life-giving source. The life-giver comes first, the parasite comes later and spoils it. This is precisely the Bible’s picture of good and evil. There has been an original goodness spoiled by this parasitic thing called evil. All our experiences of evil are exactly that: the spoiling of something good. Health corrupted by disease, love corrupted by betrayal, order corrupted by chaos, life corrupted by death. Darkness itself is an absence or obscuring of the light.

Our very experience of evil points to the biblical story. In that story, we begin with a God of light, life, and love. Then there is a turn. We have rejected God’s light, life, and love and have therefore entered darkness, death, and disconnection. Yet, in all this, the darkness we feel does not rule out the light; it presupposes it. The darkness is relative.

3. The Darkness Is Routed

I hear this sentiment everywhere I go: I guess if there’s light, you’ve got to have darkness.

People are always speaking of light and darkness as opposing forces, equally balanced and, in some senses, needing each other. It’s nonsense, obviously, but it’s managed to find near universal popularity.

I blame George Lucas. While I love Star Wars, the movies have given us the idea that light and darkness are roughly equal adversaries and that, ultimately, they balance. If you believe this, I ask you to do a little experiment. Look to the nearest light switch and try to find the accompanying darkness switch. Not there? Thought so. You see, darkness is not an opposing force to the light. It does not put up a fight against the light. When the light shines, the darkness retreats — must retreat. As it says in John’s Gospel, “The light shines in the darkness, and the darkness has not overcome it” (John 1:5).

These are the lessons that Halloween can teach us: the darkness is real, it’s relative, and it’s routed. But this is why, traditionally, All Hallows Eve was followed by All Hallows Day (also known as All Saints Day). That’s how it was meant to be. In modern times, though, we seem to have lost our confidence in the day. Perhaps we don’t really believe in the triumph of the light anymore. Perhaps we have made our peace with darkness after all. If so, then it’s not just ancient folk who are stuck in the “dark ages.” We too need a true enlightenment, one that brings us genuine confidence and hope in the face of evil.

Thankfully, tomorrow is a double celebration. On October 31st, 1517 — 500 Halloweens ago! — a movement began that decisively left “the dark ages” behind. It believed in the unquestioned triumph of Christ over evil and ushered in freedom and joy. One of the slogans of the Protestant Reformation was Post tenebras lux: After darkness, light. This is the joyful conviction that can sustain us through the darkest night. If the gospel is true, then there really can be a happy Halloween.