Letter to My 30-Year-Old Self 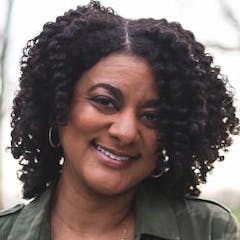 Kim Cash Tate is a wife, mom, YouTuber, and author of several books, including, most recently, Cling: Choosing a Lifestyle of Intimacy with God. She and her husband, Bill, live in Saint Louis.

You Can Be Anxious About Nothing

You Need to End That Friendship

Struck Down, But Not Destroyed

Let the Bible Tell You How to Be a Woman

Kim Cash Tate is a wife, mom, YouTuber, and author of several books, including, most recently, Cling: Choosing a Lifestyle of Intimacy with God. She and her husband, Bill, live in Saint Louis.

You Can Be Anxious About Nothing

You Need to End That Friendship

Struck Down, But Not Destroyed

Let the Bible Tell You How to Be a Woman

I wish I’d known sooner that intimacy with God is more important than my sense of “calling” from God. That when he calls us to wait, he is drawing us closer to himself. My younger self would’ve embraced my season of waiting, rather than let it frustrate her, if she had made intimacy with God the main thing.

I remember that young woman well. Thirty and pregnant with my first child — my husband and I were thrilled — I also was pregnant with anticipation. As I received the high calling of motherhood with joy, I was sensing God introducing another new calling. I had already been praying about my career. As an attorney practicing litigation in a large firm, I knew the long hours would not allow the time I wanted to spend with our child. I started exploring ways to work for a business (or start my own) out of my home.

But in church one Sunday, I sensed God’s answer. I believed he was calling me to write for his glory, a book specifically. I knew the title before I left service. That week I bought a book on how to write a proposal. I wrote the book proposal, secured an agent, and soon signed a publishing contract. Two years later, when the book released — we’d had a second child by then — I went on a whirlwind television and radio tour to launch the book. I felt such a sense of purpose to be walking in my calling.

I left the law firm, ready to crank out book after book — with two toddlers. In reality, most days I merely glanced at my laptop, unable to get to it. Frustration set in as those days turned to weeks, which turned to months. Maybe I wasn’t called to write after all.

My main struggle in those days was feeling that I’d heard God wrong. I had published one book, but I had the distinct sense that I was called to this. God had gifted me for this, others had affirmed the gift, and I had an agent waiting for the next proposal. But I hardly had time to string coherent thoughts together, let alone write them. Then, when the kids reached school age — now I’ll have time to write! — God led us to homeschool.

As the years passed, I spent a lot of time in prayer, asking God why I had such a strong sense that I was called to write, yet everything seemed to work against it. What would I say to that young woman now? Girl, you’re walking a well-worn path for believers. Just look at the life of David.

Waiting with a Purpose

David had an unmistakable call to the throne of Israel, anointed ceremonially by the premier judge in the land. Soon after David was anointed, he had a powerful victory over the Philistine giant who had put fear in everyone, including Saul, the current king. David no doubt had an overwhelming sense of purpose, bolstered by the crowds singing, “Saul has struck down his thousands, and David his ten thousands” (1 Samuel 18:7).

But it wasn’t long before David was on the run as King Saul relentlessly sought to kill him. The day of his anointing surely grew dim as David hid in caves and clefts. He reached such depths of despair that he said to himself, “Now I shall perish one day by the hand of Saul. There is nothing better for me than that I should escape to the land of the Philistines” (1 Samuel 27:1).

Yes, the young man who’d been anointed Israel’s next king, lauded for killing the Philistine giant, was now looking to the Philistines for deliverance. Years of waiting and running had turned an overwhelming sense of purpose into a crisis of purpose.

The nature of David’s calling and the level of his testing bore no resemblance to mine. But a clear sense of calling, a period of waiting, and a crisis of faith — those things I could identify with. Still, I wish I could tell my younger self to stop focusing on my sense of calling, as if that were the main thing. God had been working on the main thing all along — drawing me into a closer walk with himself.

Looking back, I can see it so clearly — the years of waiting forged a deeper intimacy with God. When I left my career, I didn’t have the time to write that I wanted, but for the first time, I had time to go deeper into the study of God’s word. Every day as my toddlers napped, I was at the kitchen table, moving book to book through the Bible. I relished this time with my Lord, so much so that eighteen years later, it’s still my favorite part of the day.

If I could, I’d tell my younger self, Girl, you don’t need to be writing anything instructive right now anyway. The Lord is merciful to keep you from that laptop. Keep doing what you’re doing, growing in the knowledge of your God and his word. Abiding in him — and his words abiding in you — will bear much fruit in his time.

What about the doubts and questions that surfaced during the waiting? I would say, Girl, do you realize how much you’re praying? You wouldn’t be praying nearly this hard if the path were smooth. You’ve gotten to where you’re talking to God so much he’s your best friend.

If I Never Write Another Book

In hindsight, that is what grieves me most. I was more focused on God establishing his call on my life than on enjoying the intimacy he was building with me through Christ. I should have delighted myself more in him, not my sense of his “call.” I still remember the day I laid all of that down. In tears I said, “Lord, if I never write another book, let me be okay with that. I just want to cling to you.”

I would stop there, smile at that young woman, and say, “Okay, girl, you’re starting to get it. And you’re in good company.” It was during the waiting that David forged a deeper intimacy with God, penning many of his psalms, including this verse: “My soul clings to you; your right hand upholds me” (Psalm 63:8). And it will be true in every season of waiting, that we don’t have to wait for the “main thing” — developing deeper intimacy with God.