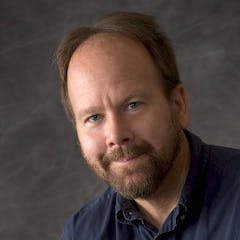 Devin Brown is a Professor of English at Asbury University and the author of A Life Observed: A Spiritual Biography of C.S. Lewis.

Meet the Maker of Middle-Earth

A 10-Minute History of the English Bible

“Luck” and Latent Christianity in Tolkien’s ‘The Hobbit’

How the Harrowing Journey Profits the Hobbit

Devin Brown is a Professor of English at Asbury University and the author of A Life Observed: A Spiritual Biography of C.S. Lewis.

Meet the Maker of Middle-Earth

A 10-Minute History of the English Bible

“Luck” and Latent Christianity in Tolkien’s ‘The Hobbit’

How the Harrowing Journey Profits the Hobbit

Today we commemorate the birthday of John Ronald Reuel Tolkien, born 130 years ago on January 3, 1892. And today, as the works of so many of his contemporaries are being forgotten or relegated to reading lists for specialized literature courses, Tolkien’s two great masterpieces, The Hobbit (1937) and The Lord of the Rings (1954–1955), continue to live on — on the page and screen, and in the hearts of millions of readers all over the world.

So why have Tolkien’s works not just survived but actually increased in popularity in the decades since their release? We could point to their intricately woven plots, unforgettable characters, amazing settings, and wonderful descriptions, but none of these elements can adequately explain the passion that Tolkien readers typically display, or their desire to reread these long narratives again and again. For a better answer, we might look below the surface and ask, What makes Middle-earth the kind of world so many readers long for?

On December 2, 1953, Tolkien typed out a fairly short, five-paragraph letter to his good friend Father Robert Murray, which would go on to become the most cited of all his collected letters. Father Murray had read and commented on parts of The Lord of the Rings and had reported that the work had left him with strong sense of a “positive compatibility with the order of Grace” (The Letters of J.R.R. Tolkien, 171–72).

Tolkien responded that he thought he understood exactly what Murray meant. Then he made his now-famous, often-quoted declaration: “The Lord of the Rings is of course a fundamentally religious and Catholic work; unconsciously so at first, but consciously in the revision” (172).

So how should we approach The Hobbit and The Lord of the Rings to find the Christian elements? One further letter from Tolkien offers a clue.

In the fall of 1958, three years after The Return of the King was released, the final installment in The Lord of the Rings, an American scholar named Deborah Webster was asked to give a talk on Tolkien. Finding little about the author in print at the time, and there being no Internet, she took out pen and paper and wrote to ask Professor Tolkien if he would be willing to share some information about himself.

On October 25, Tolkien wrote back. He began by lamenting that insignificant details having nothing to do with an artist’s work are often the ones “particularly dear” to researchers, such as the fact that Beethoven swindled his publishers (Letters, 288). With regard to himself, Tolkien pointed out, some facts — such as his preference of Spanish to Italian — had an effect on The Lord of the Rings but did little to explain it.

Tolkien went on to say, however, that a few basic facts, “however drily expressed,” were “really significant.” For instance, the fact that he was born in 1892 and spent his boyhood in a pre-mechanical setting much like the Shire. “Or more important,” he continued, “I am a Christian,” and added, “which can be deduced from my stories.”

“The Christian element in Tolkien’s stories is present but not directly evident; it must be deduced.”

Here the word deduced is key. The Christian element in Tolkien’s stories is present but not directly evident; it must be deduced. In addition, the author tells us it can be determined from the stories themselves. While Tolkien’s letters and essays can shed additional light on the Christian aspect in his fiction, if we look below the surface, we can find it without needing external sources.

In an interview, Tolkien told Wheaton professor Clyde Kilby, “I am a Christian and of course what I write will be from that essential viewpoint” (Myth, Allegory, and Gospel, 141). Here, instead of the word fundamentally, Tolkien uses the word essential. The Hobbit and The Lord of the Rings are in their essence Christian works, not on the surface. So while some Tolkien scholars label as Christian the fact (reported in the Appendices) that the Fellowship sets out from Rivendell on December 25 and the fall of Sauron is achieved on March 25 (a traditional date for the crucifixion), these details may seem more superficial than fundamental.

Instead, we might look for Tolkien’s Christian element in the profound sense of purpose that Bilbo, Frodo, and the other members of the Fellowship find in giving themselves to help others. We can also discern it in the objective right and wrong that Tolkien’s protagonists experience, even when facing their most difficult decisions. But perhaps the best illustration of the Christian foundations of Middle-earth can be seen in the divine providence we find there.

In his recent book Providence, John Piper notes that in reference to God, the word providence has come to mean “the act of purposefully providing for, or sustaining and governing, the world” (30). He suggests that another way to express what we mean by God’s providence is say that God “sees to it that things happen in a certain way.” Both ways of speaking about how divine providence works in our world also apply to Middle-earth.

In Gandalf’s final words on the last page of The Hobbit, Tolkien provides a hint of what has been behind all the so-called lucky events in the story. It is some years after Bilbo’s return to Bag End, and one evening Gandalf and Balin arrive for an unexpected visit. On learning that prosperity has come to Lake-town and people are making songs that say the rivers run with gold, Bilbo remarks how the old prophecies are turning out to be true.

“Surely you don’t disbelieve the prophecies, because you had a hand in bringing them about yourself?” asks Gandalf. Then he adds, “You don’t really suppose, do you, that all your adventures and escapes were managed by mere luck, just for your sole benefit?” (272). In Gandalf’s question, we find the first of several direct suggestions provided by Tolkien that there is far more than just luck or coincidence at work behind the scenes in Middle-earth.

In the second chapter of The Fellowship of the Ring, Tolkien returns to the topic of who or what has been behind Bilbo’s adventures, specifically his finding the Ring. As Gandalf recounts its long history, he comes to Bilbo’s arrival at just the right time and putting his hand on the Ring blindly in the dark. Then Tolkien makes explicit what has previously been implied as Gandalf tells Frodo that the Ring was picked up by Bilbo not by luck or blind chance but because “there was more than one power at work, beyond any design of the Ring-maker” (56).

In Middle-earth, as in our world, the workings of providence are typically veiled, making them sometimes discernible only in hindsight. In words that briefly pull back this veil, Gandalf concludes, “Bilbo was meant to find the Ring, and not by its maker. In which case you also were meant to have it” (56). Here Gandalf uses the passive voice without specifying who or what it was that intended these events to take place, thus implying the work of divine providence in a way similar to the person who says, “God had a plan. We were meant to meet that day.”

Nine chapters later, at the Council at Rivendell, Elrond uses similar words to allude to the hand of providence. He begins by asking those in attendance, “What shall we do with the Ring, the least of rings, the trifle that Sauron fancies?” (242). Then in a reference to the benevolent power at work in Middle-earth, he explains, “That is the purpose for which you are called hither. Called, I say, though I have not called you to me, strangers from distant lands” (242). Here again, Tolkien uses words that readers themselves might use when speaking about providence in their own lives. Sometimes we, too, may believe that we were called by God to do certain task or to be at a certain place.

“In Middle-earth, as in our world, the workings of providence are typically veiled.”

As in our own world, divine providence in Middle-earth typically chooses to work behind the scenes in ways that are not directly visible. Because of this, some characters see not providence but mere chance. Elrond tells the members of the Council, “You have come and are here met, in this very nick of time, by chance as it may seem. Yet it is not so. Believe rather that it is so ordered that we, who sit here, and none others, must now find counsel for the peril of the world” (242). Tolkien’s point is that while the actions of providence have intention and purpose, to some they may appear as sheer coincidence.

Light from an Invisible Lamp

Do you need to be Christian to enjoy Tolkien’s works? Certainly not — as is evident from the millions of readers who have enjoyed Tolkien’s fiction without sharing his faith. In fact, one of the most remarkable aspects about The Hobbit and The Lord of the Rings is their unique ability to engage and inspire people from all sorts of backgrounds. At the same time, as scholar Joseph Pearce points out, to fully understand Tolkien’s fiction, serious readers “cannot afford to ignore Tolkien’s philosophical and theological beliefs, central as they are to his whole conception of Middle-earth and the struggles within it” (Tolkien, Man and Myth, 100).

Born on January 3, 1892, J.R.R. Tolkien died 81 years later in 1973. Two years before his death, Tolkien received a letter from a fan who wrote, “You create a world in which some sort of faith seems to be everywhere without a visible source, like light from an invisible lamp” (Letters, 413). Tolkien responded by pointing out that if sanctity inhabits an author’s work or as a pervading light illumines it, this sanctity “does not come from him but through him.” Today, all those who have experienced this light that permeates Tolkien’s fiction join in celebrating both his life and his remarkable achievement.

Deacons are not only handy, administrative, or good at meeting needs. They are also holy, humble, and unusually sacrificial. Deacons are spiritual giants who bow low.