What the Catholic Church Teaches About the Mother of Jesus 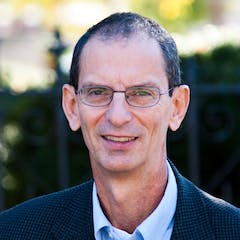 Thomas Schreiner is James Buchanan Harrison Professor of New Testament Interpretation and Professor of Biblical Theology at The Southern Baptist Theological Seminary where he also serves as Associate Dean of the School of Theology. He is the author or editor of several books and commentaries.

Whose Commandments Are These?

Stop and Enjoy the Ordinary

You Will Be Persecuted with Words

Why Not to Have a Woman Preach

The Bible as One Story: An Interview with Thomas Schreiner

Tony Reinke + 1 May 22, 2013
More by this author
Article by
Thomas Schreiner
Close

Thomas Schreiner is James Buchanan Harrison Professor of New Testament Interpretation and Professor of Biblical Theology at The Southern Baptist Theological Seminary where he also serves as Associate Dean of the School of Theology. He is the author or editor of several books and commentaries.

Whose Commandments Are These?

Stop and Enjoy the Ordinary

You Will Be Persecuted with Words

Why Not to Have a Woman Preach

The Bible as One Story: An Interview with Thomas Schreiner

What should we make of Mary, the mother of Jesus the Messiah?

Protestants and Catholics have strenuously disagreed for five hundred years. We need to understand the Catholic teaching about Mary before we consider why Protestants stand in opposition.

The first thing to be said is that the view of Mary, which is accepted in the Roman Catholic Church today, developed slowly. Doctrinal development does not pose a problem for Catholics since they believe Scripture and tradition constitute authority.

The focus in this article is where Roman Catholics and evangelicals differ regarding Mary, but a brief word should be said about some areas where we agree. First, we agree that Mary was a godly person and in many ways a model disciple. God chose her to be the mother of his son, and her humble response to the angel, where she was willing to do what the Lord called her to do, functions as an example to us all (Luke 1:38).

“By placing Mary on the same plane as Jesus, the matchless glory of Christ is diminished.”

Second, we agree that Jesus was born of a virgin — that Jesus was miraculously conceived in Mary’s womb through the work of the Holy Spirit (Matthew 1:18–23; Luke 1:34–35).

Third, we agree with the theological conclusion of the Council of Ephesus (AD 431) that Mary is the “mother of God” (theotokos). This affirmation was intended to ward off a Nestorian understanding of Jesus Christ (which emphasized his two natures to the detriment of his one Person), and thus the focus wasn’t on Mary, but Jesus. Still, Mary was “blessed” (Luke 1:42, 48) and “favored” (Luke 1:28, 30) in having the privilege of giving birth to the God-man, the second person of the Trinity. We could overreact to Catholic teaching and fail to see Mary’s godliness and her role in the story of salvation.

What Catholics Believe About Mary

Evangelicals take issue with four conceptions of Mary promulgated by Roman Catholics: 1. her perpetual virginity; 2. her assumption into heaven; 3. her immaculate conception; and 4. her role as Queen of Heaven. We will look at them one at a time, and then I will provide the Protestant response (or protest) to each.

The Catechism of the Roman Catholic Church affirms that Mary was a perpetual virgin (499, 510). According to Catholicism, Mary was a virgin in conceiving Jesus, remained a virgin in giving birth to him, and maintained her virginity her entire life. Jesus’s brothers and sisters are not the children of Mary and Joseph, but are Jesus’s cousins — Joseph’s children from a previous marriage, or close relations of Jesus.

In the second century, the Protoevangelium of James taught Mary’s virginity before and even after birth, though it doesn’t claim she maintained her virginity thereafter. Irenaeus in the second century taught Mary’s perpetual virginity, but it wasn’t held universally, for it was disputed by Tertullian in the same century and Helvidius in the fourth century also questioned its validity.

Still, the doctrine was gaining ground, and it was supported by Augustine and Gregory of Nyssa, and was affirmed in the sixth ecumenical council in 680 AD. Actually, many Reformers supported Mary’s perpetual virginity including Luther, Zwingli, Bullinger, Latimer, and Cranmer. As time passed, however, more and more Protestants began to doubt the doctrine.

“We could overreact to Catholic teaching and fail to see Mary’s godliness and her role in the story of salvation.”

Roman Catholics confess and declare that Mary was assumed — or taken up — into heaven (966), though it wasn’t dogmatically declared to be a doctrine until 1950 by Pius XII. We might think the assumption of Mary “body and soul” meant that she didn’t die, but the doctrine doesn’t determine definitively whether she died before her assumption.

The earliest references to Mary’s assumption were in the third or fourth century, but the teaching became quite popular in subsequent centuries. Almost all Protestants reject the doctrine, though Heinrich Bullinger accepted it.

The immaculate conception wasn’t formally declared to be church doctrine until 1854 by Pope Pius IX (491, 966). The doctrine developed slowly in church history, and even Thomas Aquinas opposed it. Still, by the 19th century it had grown in popularity. Technically speaking, Mary’s immaculate conception must be separated from the notion that she was without sin during her entire life, but the sinlessness of Mary is also affirmed by the Catholic Church, and thus her personal sinlessness is also affirmed (493, 508).

Mary is the object of devotion in Roman Catholicism as the Queen of Heaven. Mary is regarded as the Mother of the Church (963). Catholics clarify that Mary isn’t worshiped and adored as God is (latria), but she is venerated (doulia), and that veneration sets her apart from other mediators (hyperdoulia, 971). Her intercession can bring “eternal salvation,” and she is given “titles of Advocate, Helper, Benefactress, and Mediatrix” (969).

The Catechism insists that Mary’s mediation doesn’t detract from Christ’s mediation, but flows from it (970). Mary’s role as Mediatrix is first found in the fourth century and grew in popularity thereafter. There are some within Catholicism advocating for the notion that Mary was a co-redemptrix, but this doctrine hasn’t been accepted officially.

What We Believe About Mary

Now, a brief response to these four points of what most Protestants, especially those who are in the Reformed tradition, teach about Mary. The responses given here reflect the Reformed belief in sola Scriptura, which I do not have space to defend here.

What should we say about Mary’s perpetual virginity? We agree that Jesus was virginally conceived in Mary’s womb, but the notion that Mary’s virginity was preserved intact during birth smacks of docetism (the heresy that Christ wasn’t fully human but only appeared so).

“Praying to Mary and venerating Mary takes the glory away from Jesus Christ.”

Furthermore, when Matthew 1:25 says that Joseph didn’t have sexual relations or know Mary “until” she had given birth, this is more naturally interpreted to say that they had sexual relations after Jesus’s birth. Such a reading is confirmed by Jesus’s brothers and sisters (Mark 6:3), who are most naturally interpreted to be the children of Joseph and Mary.

In one sense, believing in the perpetual virginity of Mary isn’t a major problem since it doesn’t affect any major doctrines in the Scriptures. Still, to require such belief is problematic, especially when key scriptural texts point in the other direction. In addition, a negative view of sexuality also seems to be present in the doctrine, and such views were common in the early church.

The Assumption of Mary

The assumption of Mary into heaven “body and soul” should be rejected. We have no clear scriptural text to support such a teaching. And when we look at history, we see that the doctrine developed quite late, and wasn’t declared to be authoritative until 1950.

Such a doctrine would not have been propounded unless other views of Mary (such as points three and four above) were accepted which don’t accord with Scripture. Certainly as a believer in Christ, Mary will be raised from the dead, but we have no basis for thinking she was raised before other believers.

The notion of the immaculate conception should be rejected. Thomas Aquinas didn’t accept it, and we aren’t surprised since there is no biblical evidence for this idea. Even more problematic is the claim that Mary was sinless. We probably have an indication of her sinfulness in Mark 3:21, where Jesus’s family thinks he is insane (Mark 3:31–35).

Of course, Mary was a godly woman, but she was godly because God’s grace rescued her from her sins based on Christ’s atoning work. The only sinless human being was Jesus Christ (John 8:46; 2 Corinthians 5:21; Hebrews 4:15; 7:26; 1 Peter 2:22; 1 John 3:5). By placing Mary on the same plane as Jesus, the matchless glory of Christ is diminished. His uniqueness is compromised, even if it is claimed that Mary’s sinlessness is rooted in Jesus’s work.

Most problematic of all is the idea that believers should pray to Mary, and venerate her as the Queen of Heaven. No scriptural evidence supports this idea, for the woman in Revelation 12 isn’t Mary, but refers to the people of God as the entire chapter shows. In any case, the woman in Revelation 12 can hardly be called the Queen of Heaven. The technical distinction Catholics claim between worship and veneration is often forgotten in practice, and we are not surprised since prayer should only be directed to God.

In any case, there is no scriptural basis for Mary’s intercessory role or that she functions in some way as a mediator or a benefactor for the people of God. The “one mediator” is “the man Christ Jesus” (1 Timothy 2:5), and there is not even a whisper of Mary playing such a role in the New Testament.

Mary Would Not Rob Her Son

Praying to Mary and venerating Mary takes the glory away from Jesus Christ, and all glory and honor properly belong to him! In popular Catholic piety, the Father and the Son are often viewed as stern, and Mary’s motherly and nurturing qualities are entreated to bring people closer to God.

“Catholic conceptions of Mary diminish Christ’s atonement, compromise his person, and rob him of the glory he deserves.”

We think of the theme of Colossians: Christ is all-sufficient, and his sufficiency is denied if angels or Mary or anyone else supplements his person and work. Christ is all, and thus “all the treasures of wisdom and knowledge” are in him (Colossians 2:3). God’s “fullness” is in Christ, and we are “filled in him” (Colossians 2:9–10), and in no one else. All our sins are forgiven through the cross of Christ (Colossians 2:11–15), and so we don’t need any other mediator. Christ is our life (Colossians 3:4), and he alone.

The Catholic conception of Mary diminishes his atonement, compromises the uniqueness of his person as the God-man and as the sinless one, and robs him of the glory that he alone deserves.