Why Christians Die from Coronavirus 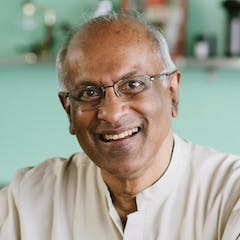 Ajith Fernando is the teaching director of Youth for Christ in Sri Lanka. He served as the ministry’s national director for 35 years. He is the author of eighteen books, including Discipling in a Multicultural World, and lives in Colombo, Sri Lanka, with his wife. They have two adult children and four grandchildren.

Are You Too Busy to Disciple Someone?

The Bombs on Easter Sunday

The Missing Relationship in the Church

God Is Building His Temple in Palestine

Ajith Fernando is the teaching director of Youth for Christ in Sri Lanka. He served as the ministry’s national director for 35 years. He is the author of eighteen books, including Discipling in a Multicultural World, and lives in Colombo, Sri Lanka, with his wife. They have two adult children and four grandchildren.

Are You Too Busy to Disciple Someone?

The Bombs on Easter Sunday

The Missing Relationship in the Church

God Is Building His Temple in Palestine

Like most countries in the world, Sri Lanka is going through a period of great confusion and fear. Our casualties have not been high, but the number of those who are infected by the coronavirus is rising daily.

Several districts in the country (like Colombo, where I live) have indefinite 24-hour curfews, with provisions being brought to neighborhoods in trucks. One of the biggest challenges facing us now is getting provisions and help to the poor who have no source of income as they live on a daily wage and have no savings or bank accounts. Valiant efforts have been taken by some Christians and others to get curfew passes and distribute provisions to the needy. Even in the darkest of times, heroes emerge.

‘It Will Not Come Near You’

Over the last several weeks, there has been some discussion among Christians about whether we are immune to infection because of the promise of God’s protection. Some are quoting Psalm 91 as assurance that they will be free from the coronavirus. The promises in this psalm are stunning — and mention “pestilence” and “plague” specifically:

In the Bible we have promises, principles, and commands, which can be divided into three categories. First are those that are true for all people all the time in all situations, such as the prohibition of idolatry. Second, there are those that are true at particular times and in some situations. Third, some general statements have exceptions because of a higher rule. For example, the general commands to obey parents “in everything” (Colossians 3:20) and to be subject to government officials (Romans 13:1–2) have clear exceptions in the Bible (Luke 14:26; Acts 4:19–20). We sometimes need to disobey authorities if we are to obey God.

Similarly, the Bible is clear that God does look after and protect us, as Psalm 91 says. He can miraculously intervene and does intervene to deliver us in this world. Indeed, he commands his angels to guard us (Psalm 91:11). That is always true. He can prevent us, at any moment, from dashing our foot against a stone (Psalm 91:12), and many will testify to how God has done that.

But that does not always happen, as the noble army of martyrs testifies. The martyrs, however, knew that God was with them, and that he was opening the door, through their death, to the greatest deliverance possible — entering into God’s presence.

Psalm 91 teaches that God looks after us. That is an absolute principle. Other passages in the Bible teach us that the way God looks after us is not always in the same way as he does in Psalm 91. This promise is applied in different ways by God, but it is always true. Through all of it, God will continue to bless and deliver his people.

When Jim Elliot and Nate Saint and their colleagues were being killed by the Huaorani tribe in Ecuador, they saw angels above them singing songs. That didn’t stop the Huaorani from killing them. Later, Elliot’s wife, Elizabeth, and Saint’s sister, Rachel, went as missionaries to those same people. The tribal people were shocked to hear them sing the same songs that the angels had sung. The whole tribe came to Christ. And they became evangelists who took the gospel to neighboring tribes.

The angels did something greater than preventing the martyrdom of those five missionaries; they opened the door for hundreds of people to receive salvation, and for millions of people to be influenced through the retelling of the story.

A whole third of the psalms are laments written by righteous people suffering what the world considers misfortunes while God may seem to have abandoned them.

Presently, I’m reading Job for my devotions. God’s plan was to glorify his name by allowing Job to go through experiences very distant to (some might think at odds with) what Psalm 91 says. Job’s friends quoted biblical principles about how God looks after the righteous (speeches in the Psalm 91 tradition), and they were proven to be wrong, and even unkind. They were unwise to apply those principles to the suffering Job was experiencing.

In Romans 8, the whole creation is subjected to frustration (Romans 8:20). There is sickness, disappointment, pain, and death. That frustration afflicts even believers, “who have the firstfruits of the Spirit” (Romans 8:23). Even though we have a real taste of what heaven is like, we still groan for now with the rest of creation (Romans 8:22–23).

When Jesus took on human flesh and blood, he embraced all the frustration that comes along with life in this world. But he transformed our world precisely by identifying with its pain and curse. We can have a deep impact on our world by identifying with its pain, just like Jesus did. In a mysterious way, suffering helps the church to grow, as the death of Stephen proved in Acts.

Closer to home for me, when the tsunami hit Sri Lanka in 2004, some Christians were miraculously saved and testified about it to the glory of God. Others suffered, like the church in Mullaitivu, where many of the faithful who came to church the morning after Christmas died while those who stayed at home were saved. The pastor of that church lost his wife and, I think, his son. But he stayed on and served his people, and now his two daughters have entered the university — a great achievement in Sri Lanka. He brought glory to God through his suffering.

There are some deeper, more important realities — and promises even more stunning than temporal deliverance — that govern us amid our frustration and pain:

People relishing the experience of loving and being loved are happy people. So, as Paul wrote while isolated and confined in prison, we rejoice in the Lord always (Philippians 4:4), and we have learned to be content whatever happens (Philippians 4:11). The happiest people in the world are not those who don’t have problems, but those who are not afraid of problems. As Paul said, again from prison, the true and greater wealth available to us is contentment in Christ (1 Timothy 6:6). A dreary prison is not a place that implies God’s blessing, but Paul was blessed — he was rich!

Paul wouldn’t have read Psalm 91 as God’s promise to keep him from prison, and even physical death, but as God’s guarantee to do more: to make us eternally invincible in Christ, so that even suffering and death serve our joy and God’s glory, as he rescues us fully and finally and decisively in Christ.

Shadow of the Almighty

Psalm 91 will, and indeed should, inspire Christians to keep trusting in God when we face troubles, like a tsunami, imprisonment, or global pandemic. He will be true to his promise to look after us and always lead us in triumph (2 Corinthians 2:14).

Elizabeth Elliot titled the biography about her martyred husband Shadow of the Almighty, which is a phrase from the first verse of Psalm 91. Even during God’s surprising providences, which bring suffering and uncertainty, the truth of Psalm 91:4–6 endures:

He will cover you with his pinions,
and under his wings you will find refuge;
his faithfulness is a shield and buckler.
You will not fear the terror of the night,
nor the arrow that flies by day,
nor the pestilence that stalks in darkness.

Amid all the confusion of this time, let’s relish the wealth of eternal safety and contentment we have in Christ.