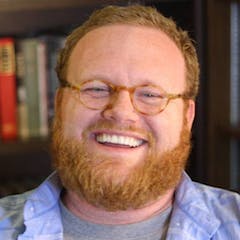 Luke Walker is the preaching pastor at Redeeming Cross Community Church and author of Lemuel Haynes: The Black Puritan. You can find more of his writing at Wrath and Grace Publishing.

Luke Walker is the preaching pastor at Redeeming Cross Community Church and author of Lemuel Haynes: The Black Puritan. You can find more of his writing at Wrath and Grace Publishing.

The year is 1753. We’re in West Hartford, Connecticut, North American colonies. Jonathan Edwards is finishing his course, the free sons of Columbia are waxing warm against the Crown, and slavery and racism cast their shadow over much of American life. This is the strange world into which Lemuel Haynes was born. These influences pressed him into a diamond-tipped iron stylus, poised to be a scribe for God’s glory.

He was a man before his time, and yet woke memes on Facebook have never mentioned him. He refuses to play nice with our neat little modern categories of race, politics, and religion. Red, white, and blue abolitionism coursed through the veins under his brown skin — skin which bled in the American Revolution and poured, over long years, the great sweat of gospel preaching. He was the American black Puritan.

Haynes was the first African-American pastor to be ordained by any North American denomination, and most likely the first African American to pastor an all-white congregation. His distinguished life began from the humblest of beginnings.

His mother, a Scottish indentured servant, abandoned him at birth. His unknown father was African. The mixed child was adopted by a man named David Rose, a congregational deacon, who named him Lemuel (Proverbs 31:1). Taking his status in society from his mother, he was raised as an indentured servant but embraced as a member of the family.

Lemuel Haynes was self-taught from his earliest days, stealing morsels of knowledge by evening firelight. “I make it my rule,” he said as a boy, “to know something more every night than I knew in the morning” (Timothy Mather Cooley, Sketches of the Life and Character of the Rev. Lemuel Haynes, 37). Sometime during his youth, Lemuel was soundly converted to faith in Jesus Christ. Many years later he would reflect, “It was reliance on the merits of the Saviour that supported me. Had I a thousand souls, I would venture them on him” (137).

His call to the ministry became quite legendary. The Rose family was in the custom of hearing a sermon read every Saturday evening. The honors fell to Lemuel. One week he articulated one with extraordinary zeal, so much that Deacon Rose inquired after the author, “Edwards, was it?” No, not Edwards. “Whitefield, surely.” Not Whitefield either. Eventually the young man replied, “It was Lemuel.”

He had penned a sermon on John 3:3 which has since been named the Saturday Evening Sermon. To the ears of the Rose family, accustomed to the preaching of those giants, it was indistinguishable. The young man had discovered the calling placed on his life.

He was trained for the ministry by local church pastors, becoming proficient in Greek and blossoming into a master preacher who filled churches with stunned hearers. He was a profoundly gifted wordsmith with lightning wits. His biographer gives a choice sampling for our enjoyment:

It is said that some time after the publication of his sermon on the text, “Thou shalt not surely die,” two reckless young men having agreed together to try his wit, one of them said — “Father Haynes, have you heard the good news?” — “No,” said Mr. Haynes, “what is it?” — “It is great news, indeed,” said the other, “and, if true, your business is done.” — “What is it?” again inquired Mr. Haynes. “Why,” said the first, “the devil is dead.” In a moment the old gentleman replied, lifting up both his hands and placing them on the heads of the young men, and in a tone of solemn concern, “Oh, poor fatherless children! what will become of you?” (123)

But Lemuel Haynes also served as a type of mediator, moving with equal regality in both spheres of the very black and white worlds he inhabited. He labored to bridge them. He took the Federalist Republicanism he was handed in the revolutionary years and the Calvinism he learned from the rich preaching heritage around him, and demonstrated how they were pregnant with armaments to combat the racism he saw all around him. He felt in himself the great contradictions of the society in which he lived and fought and preached and died.

Rather than abandon the new republic for failing to live up to its own ideals, he called young America to account, returning her own principles to her, “We shall find that subsisting in the midst of us, that may with propriety be stiled Opression, nay, much greater oppression, than that which Englishmen seem so much to spurn at. I mean an oppression which they themselves impose upon others” (Richard Newman, Black Preacher to White America, 18–19).

Was it a free country, or a slave country? This double-minded house, divided against itself, could not stand. But the answer was not to abandon it, but to reconcile it to its professed self. Thus, his political convictions became weapons. But he relied on a mightier sword.

Haynes was trained in a tradition of sound doctrine, anchored in the glory of God. He saw himself as a torchbearer of the same truths passed down from the Reformers and Puritans before him. In fact, all early black abolitionists were Calvinists. Haynes took this Reformed heritage and went further up and further in, bringing it to bear against slavery. “Haynes early encountered American Calvinism in the New Divinity theology, becoming one of its staunchest defenders and exploring its antislavery and problack dimensions” (John Saillant, Black Puritan, Black Republican, 83).

He saw the doctrine of God’s glory opposing oppression. To celebrate God’s glory is to acknowledge him in all things. And where is God most profoundly displayed but in creatures who bear his image? “Men,” he says, “were made for more noble ends than to be drove to market, like sheep and oxen” (Newman, 23). God may distinguish men by their natural abilities, “but not as to natural right, as they came out of his hands” (20). These rights belong properly to image-bearers and thus concern the glory of the God whose image they are.

To oppress, then, was to lay direct assault to God’s glory by ignoring God. “To despise blacks, to trade in slaves, or to hold slaves was not to acknowledge God, to not approach his affections, mind, and will. A more forceful challenge to the slave trade, slavery, and racism could hardly have been articulated within the Calvinist tradition” (Saillant, 114). Striking this path, Lemuel Haynes made glory-powered advances from within American Calvinism.

He also discovered that God’s sovereignty was a force for racial equality. Through the horrors of the African diaspora, coupled with British oppression, he believed God was teaching Americans the preciousness of true freedom by birthing ethnically mixed churches and societies out of immense fires of racism and hatred — all to display his most sovereign and glorious grace. Indeed, the gospel of the glory of Christ is the only force powerful enough to bring the oppressed and oppressors into this kind of happy, loving brotherhood. An arrangement that secures God all the glory.

They Discovered He Was Black

Haynes preached this mighty gospel through his seventies, even after he was dismissed from his pulpit when the tables had turned doctrinally, politically, and racially. He reflects upon his experience in the third person: “He had lived with the people of Rutland for thirty years, and they were so sagacious that at the end of that time they found out that he was a n[****]r, and so turned him away” (Newman, 14). Now perhaps at last his views had become as unacceptable as his skin.

The powerful weapons Haynes wielded were lost when later abolitionists turned to free-will religion. To them, the black American population was a sad byproduct of a cosmic accident. There was no divine design in it. This left the black presence in America as an unwanted, shadow population. Abandoning the Calvinism of their forebears, their house of abolition was emptied.

Learn from His Life

Surely there are many lessons for us here. While the Black Puritan may have occasionally reached the eighthly and ninthly in his sermon applications, we will content ourselves here with a firstly and only. The legacy of Lemuel Haynes is that of Spirit-empowered, Bible-saturated free thinking. He was free of the restraints of groupthink and identity politics; he would not be their mindless subject. He was able to marshal the truths he studied into a singular force in his own mind, sending them to war in his own heart and out into the broad world. Let men pervert their meaning; he would embrace them nonetheless.

His lesson to us is this: become dangerously learned. Be masters of truth; or rather, be mastered by truth until it becomes instinctive. Lemuel kept Scripture at the fingertips of his heart, which enabled him to treat whatever he studied with heavenly wisdom and make powerful use of it in his world. There is great need in our own day for levelheaded, Bible-bleeding thinkers. Let us stand for truth, though all the world stands against us. Let us, like Lemuel, be ahead of our time. For that is what it really means to be citizens of heaven on earth.