The Rise of the Roman Pontiff 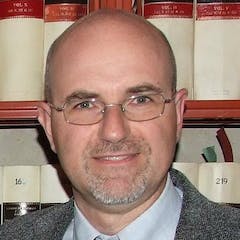 The Catechism of the Catholic Church states, “The Roman Pontiff, by reason of his office as Vicar of Christ, and as pastor of the entire Church has full, supreme, and universal power over the whole Church, a power which he can always exercise unhindered” (882).

Further reinforcing his power and authority, the catechism claims, “The Pope enjoys, by divine institution, supreme, full, immediate, and universal power in the care of souls” (937). The catechism presents the papacy as a divinely appointed institution that presides over the life of the church and exercises its rule over God’s flock.

Where do these massive claims come from? Roman Catholics trace the pope’s origin to the apostle Peter. But history tells a different story.

Rome wasn’t built in a day, and neither was the Roman Catholic papacy. It was a long process that led to the setting up of this millennia-old office that combines spiritual and political claims.

The pope claims to hold an office originally bestowed by Jesus upon the apostle Peter, and which has been passed down through a direct and unbroken line of succeeding apostles. In other words, the pope claims to hold apostolic authority and continue the mission Jesus supposedly entrusted to Peter in Matthew 16:18: “You are Peter, and on this rock I will build my church.”

The Roman Catholic Church sees an embryonic stage of the papacy in this passage. It believes Jesus gave to Peter (and by implication, to all his formal successors) a foundational role in the building of his church. Subsequent traditions and practices continued to develop the bishop of Rome’s role to the point at which the papacy eventually emerged.

However, when we do a little digging, we soon enough find no organic connection between what Jesus says of Peter in Matthew 16:18 and the function of the papacy. The pope claims a succession to Peter’s ministry, but Jesus makes no reference to such a succession. Nor can we see in the text how this succession became attributed to the city of Rome, nor the imperial form that the papacy took.

A better interpretation of Matthew 16:18 is that the church, the community of Jesus’s disciples, will be built upon Peter’s confession that Jesus is the Christ, the Son of the living God, not on Peter himself. Jesus underlines the fact that “my” church will be built in such a way. It is not Peter’s church; it is the church of Jesus, founded by Jesus as the Messiah. Jesus is the founder and the builder of the church, whereas Peter is a witness, a spokesperson of this divine truth that God was revealing to him and the other disciples.

Moreover, Jesus gives no indication that Peter will have successors that will take his place. This text can be seen as the biblical basis for the papacy only if the doctrine of the papacy has already been established apart from Scripture, and then subsequently and retrospectively squeezed into it.

Child of the Empire

If the papacy isn’t the office of Peter’s apostolic successors, where did it come from? A look at history shows that it’s far more a product of the Roman Empire than of Peter’s ministry. The Roman imperial pattern was the influential blueprint that shaped the papal institution from the fourth century onward. The papacy is more a child of imperial categories than biblical ones. The papacy never would have emerged if there were no empire forming the political and cultural milieu of the life of the early church.

The slow process that led to the formation of the papacy depended on the importance of Rome as the capital city of the empire and the power it exercised in the ancient world. The ideology of the Roma aeterna (eternal Rome) crept into the church and influenced the way Christians perceived the role of the church of Rome in relation to the role of the city in the affairs of the empire.

As the Roman Empire gradually abandoned the West, what was left in Rome was the “imperial” structure of the church with the pope as its head. Then, between the fourth and fifth centuries, popes applied to themselves the title of pontifex, the name of the chief high priest in ancient Rome.

Several centuries later, confronted with the Protestant Reformation, which invited the church to turn from its self-absorption and rediscover the gospel of God’s grace, Rome strengthened a sacramental system that made the church the mediator of divine grace. Then, confronted with modernity, which pushed for a review of the prerogatives of the church over people’s consciences and society, Rome elevated the papacy to an even more accentuated role through the dogma of papal infallibility — a move without any biblical support whatsoever.

Rome vs. the Reformers

The papacy is a child of the Roman institutional church, rather than a child of Scripture. This is why the Protestant Reformers took issue with it. In writing against the Catholic theologian Johannes Eck in 1519, Martin Luther developed his critical approach towards the papacy with a full set of arguments.

According to the German Reformer, the authority of popes and councils should be subordinate to that of the Bible. The papacy was not instituted by Christ, but was instead established by the church over the course of its history. So it does not come from “divine law,” but is instead a human institution.

Luther argued, further, that the “rock” of Matthew 16:18 is not a reference to Peter, but is either his confession of Jesus on behalf of the whole church or Christ himself. Christ alone is the solid foundation of the church (1 Corinthians 3:11). The Roman popes have nothing “Petrine” about them, nor is there anything “papal” in Peter. The papacy is not commanded nor foreseen in Scripture, and therefore obedience to the word of God must take precedence over obedience to any mere human. Luther stressed that if the pope disobeys Scripture, the faithful Christian should follow the latter without hesitation. Christians are not obligated to obey an unfaithful pope.

To this biblical argument for the headship of Christ, Calvin added a historical reference to some patristic writings that support the same New Testament view. Even Cyprian of Carthage, a church father considered by many to have favored an early form of the papacy, calls the bishop of Rome a “brother, fellow-Christian, and colleague in the episcopate,” thus showing that he did not have in view the kind of primacy that was later attributed to the pope.

To keep the unity of the church, Christ alone is the Lord we need. This was true in the sixteenth century, and it continues to be true today.

What About the World?

In today’s world, this is only one side of the matter. In ecumenical circles, many are inclined to believe that, in the globalized world, a global Christian spokesperson would be practically useful for Christianity as a whole. In interfaith circles, some religious leaders (for example, from the Muslim world) go as far as to say that the pope represents the whole of humanity when he advocates for the poor of the world or when he makes appeals for peace.

The world, both religious and secular, seems to yearn for a global figure that no political institution and no international organization can provide at the moment. Therefore, Protestants are pressed with the question, Does the world need a leader in order to live in peace? It’s a question that continues to be posed to Bible-believing Christians, especially in times when the pope attracts much attention and is looked at as being one of the few, if not the only one, who can speak on behalf of all.

The troublesome reality, however, is that the pope continues to claim religious and political roles that are biblically unwarranted. As the church does not need a mere human pope to be united, so the world does not need a global religious leader, other than Christ himself, to live in peace. Jesus said, “Peace I leave with you; my peace I give to you” (John 14:27). The church and the world need Jesus Christ, and him alone.

The Sorrows of Minneapolis

For over 40 years, John Piper has made his home in Minneapolis, a city now on fire with riots and unrest. He offers this prayer to God in the midst of the turmoil.