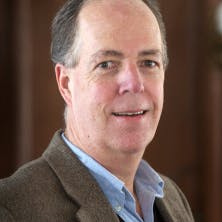 Richard Lints is the vice president for academic affairs and dean of the Main Campus of Gordon-Conwell Theological Seminary, north of Boston. Dr. Lints is also the author of Identity and Idolatry: The Image of God and Its Inversion (2015).

How Does God’s Forgiveness Free Us from Idols?

Why Are Relationships Thin in the Digital Age?

Has My Phone Become My Idol? Three Diagnostic Questions

Why Are Control Freaks Prone to Idols?

Why We Never Find Our Identity Inside of Ourselves

Richard Lints is the vice president for academic affairs and dean of the Main Campus of Gordon-Conwell Theological Seminary, north of Boston. Dr. Lints is also the author of Identity and Idolatry: The Image of God and Its Inversion (2015).

How Does God’s Forgiveness Free Us from Idols?

Why Are Relationships Thin in the Digital Age?

Has My Phone Become My Idol? Three Diagnostic Questions

Why Are Control Freaks Prone to Idols?

Why We Never Find Our Identity Inside of Ourselves

We are joined one last time by Dr. Richard Lints, who serves as the Vice President for Academic Affairs and Dean of the Main Campus of Gordon-Conwell Theological Seminary, north of Boston. Dr. Lints is also the author of a fascinating book that releases this winter, titled Identity and Idolatry: The Image of God and Its Inversion.

I want to turn and close with the gospel, but you mentioned busyness earlier in the week. How does idolatry breed busyness?

I think busyness is a contemporary idol. I am not sure it was an idol in an earlier time. You might say sloth was an idol of an earlier age, although I don’t want to deny that there is this curious contradiction in modern life between busyness and sloth called “entertainment.” And yet the circumstances of our lives in the West, outside of some smaller communities (I don’t want to, again, overgeneralize that all communities and all cultural contexts of our time are saturated with busyness), but I would say it is the dominant motif for most people. We have a sense of too many things taking place in our lives and we want to just slow down.

One sign of this in religious circles, of all theological traditions, is the move toward what we might call spiritual formation toward remembering Sabbath, the rest, slowing down, becoming a spiritual discipline. That kind of movement, if you will, is, it seems to me, just a response — sometimes a good one, sometimes not — a response to being overwhelmingly busy.

Stayin on the Surface

But there is a sense in which busyness is different than accomplishment. And busyness is living on the surface of life — feeling like we are so far into the weeds of minutia and small details that we never really tackle the big issues of life. Mostly we experience our schedule as our master, rather than vice-versa. That in itself is just an indicator. A parent of young children has so many things to do in life that probably aren’t that important, but they end up feeling like they have to do them: They have to get them to the sports. They have to get them to the music lessons. They are living constantly in the car. They are constantly going from activity A to activity B. And they feel overwhelmed and yet they can’t get out of it.

And, again, I want to be careful to suppose that there is something fundamentally evil about playing sports or engaging in music lessons or something. But it is that desire to have everything for one’s child that leads to this sense of never really having anything of significance. And so we are so busy we can’t get under the surface of our lives.

Well our time has been rich, but it comes to a close. As we go out, how does the gospel of the glory of Jesus Christ combat the work of idolatry on our souls, reshape our identity, and truly satisfy our souls?

So there are two parts to it. We are going from Genesis to Pentecost, if you will, having spent most of our time in the golden-calf narrative here in the conversation that is on idolatry. We need to be reminded that we are created by a God who grants significance and safety — that we are created to yearn for it, to look for it, to desire it. And that is found in our Creator, a God who is deeply good, generous, gracious, just — all that satisfies us is found in him.

Brokenness, then, is simply the story of looking for that significance and safety somewhere else. The gospel, then, is God’s response to our brokenness and our yearning for significance and safety. So the gospel is the storyline that takes us into this — not simply a return to Genesis and not simply a return to the original state. But it now runs us through the narrative of forgiveness, of grace, and therein lies the deeply satisfying character of the gospel. That is to say, it is not simply saying this is the way to define safety and security, but actually that safety and security are now matters of grace, matters of God’s generosity in a broken world.

And so it is deeper, it is richer than it was even in Genesis by virtue of the fact that it overcomes our idolatries. It doesn’t simply break the power of our idols. It does in part. But the dynamic of forgiveness is itself an experience richer than we would have known had we not been broken and idolatrous.

So when we have had an argument with a coworker or with our spouse, our first intuition is never to admit fault. But somehow, someway, when by God’s grace we ask for forgiveness, and it is actually granted, there is nothing like that experience that satisfies us. It is just deeply emotionally healthy.

And so here is the gospel: that God’s forgiveness is made known in the midst of our idols, and therefore, out of his grace the idols become less and less powerful in our lives.