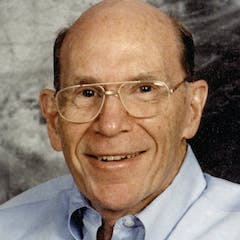 Jerry Bridges was an author, speaker, and staff member of The Navigators.

You Never Outgrow the Gospel

Magnifying the Law of God

The Gospel for Real Devotions

Jerry Bridges was an author, speaker, and staff member of The Navigators.

You Never Outgrow the Gospel

Magnifying the Law of God

The Gospel for Real Devotions

Author, The Pursuit of Holiness

Bestselling author Jerry Bridges passed away today at the age of 86. He was not only a friend, he was a big influence on my Christian life, and many of you could say the same thing. His books are as wonderful as they are authentic, and I’ve always had the sense his writings were the product of the deepest wrestlings he faced in his own walk with the Lord.

Over the years I’ve been honored to interview Jerry several times, and in the winter of 2011, I asked him, looking back over his 60+ years as a Christian, what were the hard-won lessons he would want younger believers to take from his life? Here’s what he told me.

There are probably five significant truths that I would like for a young believer to know. Unfortunately, I learned these over a period of a number of years simply because I was not exposed to the right kind of teaching. I will just take them in the chronological order in which I learned them.

The first thing I learned, which really began my walk with the Lord, is that the Bible is meant to be applied specifically in our daily lives. Most people just have the idea that if I don’t murder somebody I’m okay. But I learned that the Bible was meant to be applied in the context of everyday life. I was a young officer in the U.S. Navy at the time, serving under a commanding officer who was not easy to get along with. He had almost no people skills and those of us who were younger officers resented him. And one day I read 1 Timothy 6:1, “Let as many servants as are under the yoke count their own masters worthy of all honour, that the name of God and his doctrine be not blasphemed” (KJV). And immediately I made the application of the principle that a young officer who is serving under a difficult commanding officer, let him count him worthy of all honor, for God’s sake. So that was a specific application. That is what I mean to be very specific and very practical in the application of Scripture.

The third significant truth that I learned was the doctrine of election, that I am a Christian because God chose me from before the foundation of the world. And when I was first exposed to election, it was such a brand new thought I pushed back. I thought my friend had gone into heresy. But God in his grace opened my eyes to the truth, and I remember very well my reaction as soon as it just sort of hit me all of the sudden. And I just dropped to my knees and I thought of Romans 12:1, “I appeal to you by the mercies of God to present your bodies as a living sacrifice.” And I remember saying: God, I have done this before. But I have never understood your mercy, your grace as I do right now.” And so that was that.

The fourth great truth that I learned was the necessity of preaching the gospel to myself every day. I learned to look to Christ as my righteousness rather than to my own performance. Early in my Christian life, I had gone from one extreme, what I call self-effort — this is what the Bible says, so just obey it — to the opposite extreme — you can’t do anything, just trust Jesus to live his life through you. These are two ditches you want to stay out of. And after wrestling through both of those, the Lord opened my eyes from the Scriptures to see that what the Bible teaches is what I call dependent responsibility. I am responsible to deal with sin, I am responsible to grow in the fruit of the Spirit, but I am dependent on the enabling power of Christ through the Holy Spirit to enable me to do that.

Finally, the fifth thing that I have learned is an increased awareness of our dependence on the work of the Holy Spirit in our lives, as the one who is the director of our Christian growth. Just as an athlete needs a coach, so we need the Holy Spirit to coach us, to point out our weaknesses, and to help us. So he gives us direction, and then he works in us himself. The technical term is monergistically, which means he works by himself, apart from our input. And then he also works synergistically, which means he enables us to work. And I would say in the last couple of years of my 63 years with Christ, there is an increased awareness in my absolute dependence on and my appreciation for the work of the Holy Spirit.

So I would say those are the great truths I learned, and I see no reason why a new Christian cannot at least begin to learn these right up front. There is no point in having to work through 50 years of difficult experience, like I had to do. Just get it all right up front, in small doses, of course, just like you go to school and you are taught to read and then you are taught to count and then you get into fractions. I have tried to do this in my books, to help people to learn some of these great truths early on, so they don’t have to make all the mistakes that I make.

An old German proverb says: “Too soon old; too late smart.” And I think that describes my Christian life. I think it doesn’t have to be that way.

That is right. Unless you are German like me. We learn very slowly.

Well, that is wonderful. Thank you for your testimony. Thank you for the model that you give this younger generation of a man who is willing to learn all throughout life, willing to grow, willing to preach the gospel to himself every day. You are quite a model and I am very grateful to God for you.