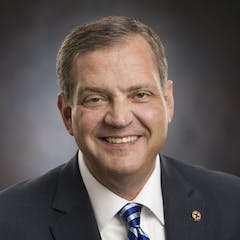 So has the modern church failed to equip businesspeople? And if so, what can be done about it?

Those are my questions to Dr. Albert Mohler. Among Reformed leaders in American, I’m not aware of many gifted leaders who have proven it over the decades more than Mohler, the President of The Southern Baptist Theological Seminary in Louisville, Kentucky, where he brought unimaginable institutional transformation, now documented in the 2015 book, Baptists in America: A History by Thomas Kidd and Barry Hankins.

Mohler is not only a leader, he’s written a book on leadership, titled: The Conviction to Lead: 25 Principles for Leadership that Matters. I talked with him, and began by asking him if the church has let businesspeople down, and if so, how.

I think the church has failed not so much by a strategic decision to ignore the business world, but by a couple of things, a confluence of the fact that many churches simply don’t know what to do with the world of business. And that is partly because of the social distance and otherwise because some churches simply don’t have the kind of natural entry into that context.

I think the second reason, though, it is a little more serious and that is a lack of confidence that we really know what to say in that world and I think we do. I would not suggest that Christianity comes with a technical and comprehensive stated economic or fiscal policy, but it does come with the application of Christian truth to everyone who is deployed for the glory of God in the world of business.

In your book, one of the most helpful points you make is that leadership is about storytelling. You write, “No organization that exists simply for itself is worth leading. . . . Leaders want to lead organizations and movements that make a difference — that fill a need and solve real problems. That story frames the mission and identity of the organization, and explains why you give your life to it. The excellent leader is the steward-in-chief of that story, and the leader’s chief responsibilities flow from this stewardship. Leadership comes down to protecting the story, bringing others into the story, and keeping the organization accountable to the story. The leader tells the story over and over again, refining it, updating it, and driving it home.” Explain this idea more for us — leadership as storytelling.

Well, it is more than that, of course, but it is never less than that, because any leader seeking to lead in any important endeavor ends up telling a story about where things are and where they need to be. And, furthermore, the leader comes with his or her own story. That story becomes a part of explaining how the convictions have come to take a possession of the leader and why he wants others to be a part of that story in order for the organization, the congregation, the institution, the family, whatever group it is, to arrive at the destination that is implied by and fulfilled by the story.

So whether it is a political leader saying, “This is what America is all about. This is what we were founded to be. This is not what we need to do,” or whether it is Moses reminding the children of Israel over and over again. Remember your story. We were in bondage to Pharaoh in Egypt, but God brought us out by his mighty hand. And then everything that follows is predicated on the fact that, ok, now we know our story. We know who we are. And that implies what we are to do.

Speaking of stories, how does a Christian leader who understands the redemptive storyline — creation, fall, redemption, re-creation — translate that into what he does on Monday?

You know, Tony, I think that is a fantastic question and it is answered only partially in terms of anyone trying to take a stab at that. But let me suggest this. I think a part of what the Christian in the business world — you might say even in the secular world, because it would apply to the world of politics or even the world of academia or the cultural creative — I think a part of what the Christian has to say is, “Look. What we are doing is really important. I am absolutely convinced this work is important. It is important because in this world we have been put here for a purpose and I am very thankful to have these gifts and this opportunity and to be with you in this endeavor.”

My marriage is actually more important to me than this work. My children are actually more important to me than a promotion. At the same time, I give myself to a greater degree of commitment. I am invested in this to a greater degree of personal heart, mind and soul, because I know that this is important. And the Christian worldview validates the importance of work in this world. And the glory of God in the human being made in God’s image, doing what in terms of a biblical worldview that says this life we are living right now is not something that is just a God has created us to do to use creative energy, to be driven by visions, to use the physical capacity to craft, to manufacture, to create, to use the relational gifts, to be able to sell, to buy, to bargain, to negotiate.

All of these things are validated in terms of the biblical worldview. This is real life. We are promised an even more real, richer life in Christ to come, but this life is validated as being important, not only to us, but to the Creator who gave us these gifts and gave us life and gave us a task.

Yes. So every company should be led from a sub-narrative to explain why their services or products matter. But some don’t — or it’s at least not obvious. How would you counsel a businessman in a corporation that — to be honest — seems to have no compelling story to protect? What then?

You know, there is an old Christian theological concept that is important here and it is called sphere sovereignty and it reminds us that we are responsible for that which is put into our care, under our stewardship. So one of the things that every Christian in the business world or the secular world needs to remember is we are not responsible for the things that are beyond our pay grade. If the company we are working for doesn’t have a clear grasp of its story, we are probably unable to reach two or three executive levels above to solve that problem. But where we are, where our unit is assigned, the work that this ours, that has a story and we are at least going to be very clear about what our story is. And furthermore, we are going to try to help others to understand how important it is to know who we are, why we are here, what we are doing, why it matters and what every group being led wants to know: Where in the world are we going?