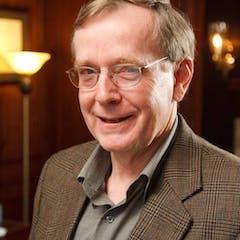 David Powlison served as the Executive Director at Christian Counseling & Educational Foundation and edited The Journal of Biblical Counseling.

Can I Grow in Holiness Without the Church?

The Root of Sinful Anger

Ten Ways Not to Waste Your Cancer

Christ's Grace and Your Sufferings

David Powlison served as the Executive Director at Christian Counseling & Educational Foundation and edited The Journal of Biblical Counseling.

Can I Grow in Holiness Without the Church?

The Root of Sinful Anger

Ten Ways Not to Waste Your Cancer

Christ's Grace and Your Sufferings

A few years back I had a chance to sit down with some friends of ours at CCEF, the Christian Counseling & Educational Foundation in Philadelphia. I got to sit down with David Powlison, a biblical counselor and a favorite author of mine. I asked Dr. Powlison, “What is sinful anger, and what does it express?” Here’s what he said.

Sinful anger is an expression of the fact that “I am not pleased with what is going on right now with you, you jerk” — or whatever is the variant thereof. The Greek or Norse mythology is just great in this. It presumes a Zeus or a Thor or some guy throwing thunder bolts, because the world is not going the way he wants.

And the Bible enters that metaphor that the mythologies capture and puts us right in the seat of the kingdom builders:” the ones who attempt to live for my way and the ones that, when my almighty will gets crossed, I throw lightning bolts at all offenders. Or I sulk or I get passive aggressive in some way, and demonstrate that you are not giving me what I want; you are in the doghouse in some way.

So the Bible has these absolutely unmistakable, heart-searching, pride-devastating analyses of sinful anger. One of the ones that I have found most convicting, and then from conviction, the most nourishing is in James 4:12, where James says — and it is in the context of anger and interpersonal conflict, and all kinds of fussing and fighting and quarreling —“There is only one lawgiver and judge, he who is able to save and to destroy. But who are you to judge your neighbor?” And it is one of those that just peels away the front story and gets to the back story behind anger.

Seeing that inner core of anger is tremendously helpful in one’s sanctification, in pastoral counseling, preaching, and so forth.

‘My Will Be Done’

And the Lord opens the books to reveal the heart and says, “You are fighting because of you yourself. You are fighting because of your heart.” Even if the other person is not doing right, and, in fact, is doing wrong, sinful anger is an expression of your playing God according to James 4:12. Who are you if you judge your brother? Who are you if you speak evil of him? Well, you are God. You are acting as though you are lawgiver and judge.

That inner core of anger is something that none of the self-help books in Barnes & Noble or on Amazon is going to tell you. It’s one of those things that, from a biblical point of view, is utterly obvious and so sanity-inducing: to be able to see that the covers of the human heart are peeled away. The book is open. I can actually ask, “Why am I embittered? And why is there that cutting, sarcastic edge in my voice? And why am I raising my voice, and there is a tone of real disdain or disgust toward the person I am angry at?” And as you really open the book, the way God opens it, you see yourself — that there is a pride, a God-playing, a passion for my will be done that has taken over the controls.

Godly anger is one of those things that is just an inch away, and yet it is ten million miles away.

One example I like to think about is that both Satan and Jesus point out our sins and express anger. But Satan expresses anger, driven by pride and self-will and condemnation, unto his own purposes. Christ expresses a holy anger unto God’s glory, which is an anger that has chosen to bear the wrath himself. And so they are both pointing out what is wrong, but one voice is pointing out what is wrong the right way. The log is not in Jesus’s eye when he is looking at our specks. For his children, he is able to put his finger right in our eye and rummage around and get rid of the speck; whereas sinful anger would go in there and stick you in your eye.

Both have to do with right and wrong. Now righteous anger typically sees right and wrong more clearly. But you can actually see what is wrong and be sinfully angry. It is a different issue. Seeing what is wrong is your circumstance that is coming at you. And the choice of whether your anger will either be fundamentally godless or fundamentally, though firm and vigorous, also laced with mercy, and fundamentally submitted to Christ’s kingdom — that is the life-and-death difference for a person tempted to be angry.