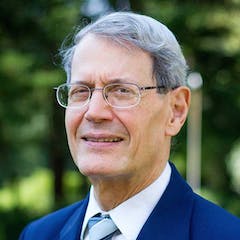 We’re joined again by Dr. Vern Poythress. He has degrees from Cambridge and Harvard and Caltech, and of course Westminster Theological Seminary, where you now work and live. A New Testament scholar, a mathematician, a man who can talk on just about anything. And we are talking about your book, Chance and the Sovereignty of God: A God-Centered Approach to Probability and Random Events, published in 2014.

Yesterday we talked about coin tosses. Today I want you to explain, without going into too much of the detail: Why are casinos confident of making a profit off the gambling? You explain the math in the book, but for us here, in 5 minutes, explain why casinos don’t lose money in the end.

Right. Well, they make sure. They wouldn’t stay in business otherwise. But God has put in place in this world, in his governance of the world, regularities even with respect to what we call “chance events,” events that we cannot predict, the thing of the shuffling of cards, or a ball running around a roulette table — God is in charge of all of that.

And part of the marvel of it — if we can separate it from some of the moral evils that crop up in gambling — part of the marvel of it is that there are regularities and faithfulness and such wonderful consistency even in this area of so-called “chance events,” events that we cannot predict. But you see the regularities: If, for instance, you flip a coin 1,000 times, roughly 500 of the flips will be heads. Why is that? It is an expression of the wisdom of God and the faithfulness of God in a very specialized and small area.

So when they promise a payment, it will be a little less, they will take a cut out of that. On the average, excitement for the gambler is: Maybe I can win a bundle. And you might, because we can’t make those predictions. But if you make a bundle and you go back the next day and try to make another bundle, you will probably lose it all back, because in the long run — and this is the thing of God’s regularity — in the long run, things average out. And, as I say, in these casinos and setups like that, the house, the owner, is taking a small percentage, but he wants to make it interesting, and he wants people to be there who have the excitement of sometimes winning. But he is taking a small percentage out.

With the American roulette wheel there is a zero and a double zero in addition to 36 numbers. Now that is getting into the details, but if the ball falls on those two numbers, then you lose even bets. You can bet for even, and 0 and 00 you lose. So that is the little percentage. One out of 18 times you are not going to break even on the average. So that little bit is enough for the casino to make its amount.

And the fact is that most people who are gamblers don’t think in terms of those things. They think in terms of “getting a break” and it is as if they are worshiping Lady Luck. So, again, the issue of idolatry is there in the background. They think: I can beat the odds, because I’m special or because something that I will do will give me a blessing. But they ought to be looking to God for a blessing.

Yes. We’ll get to the ethics of gambling in a moment. But, I mean, this point is so huge we need to camp here for a moment, because what you’re saying is that God equally governs chance events and rules over regularities, and he does so at the same time. This is mind-changing because I think even many good Calvinists would tend to assume that the 500/500 split on coin tosses is purely random naturalism — but you’re saying that divine law is what makes that predictability a reality. Unpack this more.

Yeah. It is because he is the God who is the Creator, who is the innovator. So anything that is new, he is behind it. That is the element of the novelty and the unpredictability. And he is also a God of faithfulness who maintains the world in its place.

And the thing with coins, it is just a simple example but it’s related to the issue of weather. And there is a number of passages in Scripture that make it clear that God brings snow and the rain and sometimes famine. God is in charge of all of those things. But if you think of the snow, it is each individual snowflake contributing to the snow. Or it is each individual raindrop contributing to the rain.

We can predict the seasons — and that is promised by God in Genesis 8:22, right after the flood when he says that summer and winter and seedtime and harvest will not fail as long as the earth remains. That’s God there. And we think of weather. Yeah, I know we live in an environment where people who pretend that God is absent -- so weather is just weather. No, it isn’t! It is God bringing the weather. The seasons are his doing and he is so faithful that we can make predictions, and you can run the computers to make these weather models. And it works pretty well. But you are relying on the faithfulness of God.

At the same time, you can’t predict the weather on this day of the year, a year from now. That is something God already knows, but we don’t. So it is both unpredictability and predictability. And that combination is due to the fact that God is in harmony with himself ultimately. His creativity of things that are new and surprising is in harmony with his faithfulness with the things that are the same.

And so it can all be traced back to God, in fact, to God as Trinitarian God, because the differentiation of three persons as God is in back of the differentiations of the variations we see in the world. So there is a vast area here. I get exciting even as I am talking about it. There is a vast area for us to explore and praise God for and to recover the biblical teaching that God’s hand is in all this and it is not just: “Oh, this happens, as if by a mechanism or without God being present.”

I would. You know, it is related to the fact that I want to trust in something, a break, some special event, where I will get a windfall rather than trusting in God. It is an alienation of affections from where they should be.

Of course, many people will suppress their true motivations because that is the way sin works. You conceal from yourself some of the more rotten aspects of your own sinful tendencies. So people don’t consciously, but underneath, there is this discontent with the lot God has given you. And sometimes discontent with the plodding nature of hard work. So, you know, if I am putting in work in a job, nine to five, five days a week, I’ll get some benefit. But it is painful in a fallen world and it takes a long time and I would rather get rich quick. You know, that is what people think.

Yes. Okay, finally, any time we address the lottery or gambling, Christians scoff. We hear from people, people familiar with Desiring God and John Piper, who will instinctively respond by saying: “You fuddy-duddy fundamentalists. Yes, I get the math, but leave me alone. It’s just a hobby. My $20 in nickels for a casino slot machine on a Friday night, or my $5 scratch ticket, or my one lottery ticket I buy each year. It’s all benign fun. Get off my tail Piper, get off my tail Poythress, I’m not a God-rejecter.” What would you say to Christians who believe gambling, even on a small scale, is a harmless side hobby?

Well, I think there are several things to say.

One, the issue of motivation is, indeed, primary. Jesus in the Sermon on the Mount goes after that underlying issue. So it is not simply a question: Well, I can keep to the letter of the law, and then no matter where my heart is it doesn’t matter. No. You must guard your heart, because from it are the issues of life (Proverbs 4:23). And the heart is deceitful above all things and desperately corrupt (Jeremiah 17:9). So it is easy to conceal the fact underneath by saying: I want to have fun, I want to just have a relaxing time. But there are different ways of having fun and relaxing, and what is underneath that? So I think that has to be the challenge, rather than saying mainly: We have a rule.

But there are other sides to the issue as well, because the whole gambling industry intrinsically has areas of corruption. And I think the Puritans saw the destruction that came out of that more broadly and they were just horrified by it. And it also takes place in terms of the question: Even if I win money, is it illicit gains? The book of Proverbs has a verse when it says that if you seek for sudden riches it is folly, but if you gain little by little and, of course, it is also the virtues of hard work, because that is the calling God has given us (Proverbs 13:11; 20:21). Then, you know, that is the way to follow the Lord’s way.

So I think there are principles like that as well that ought to make us ask a lot of questions about, What are the motivations of the individual? but also, What is the larger picture? And what makes me most sad is that there are people who talk about an “addiction” as if an addiction is kind of like a medical thing, but it is really a spiritual addiction. It is a bondage to sin and there are people who are “addicted” gamblers and they are destroying their families and they get themselves into debt in all kinds of things and it preys, I am told, a lot on the poor because the poor are looking for a quick way out of all the struggles of their situation and it seems to offer salvation. And, again, when you use that language, you can see it is really a kind of counterfeit form of salvation. Here is what will get you out of your troubles.

It is. And it is a sobering way to end our time this week, but Dr. Poythress, thank you for being with us these past couple of days!

You are welcome. I am glad to have been here.