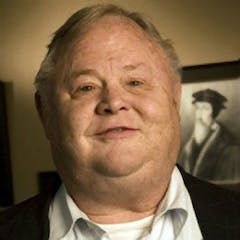 We’re back one last time with John Frame on the podcast. He’s the author of A History of Western Philosophy and Theology.

Of course, Christians are not the only people who know things. Non-Christians know a lot of truth about this world and about how it works. All knowledge is in some way a revelation of God, of course, as we talked about yesterday. But it seems non-Christians can even perceive (at some level) what is true, good, and beautiful. Yet, the Bible also makes it clear that unbelievers suppress the truth in unrighteousness (Romans 1:18).

So, Dr. Frame, how would you describe the truth that unbelievers grasp? And what do you mean when you say non-Christian thought vacillates between rationalism and irrationalism?

Well, it is very difficult to describe, Tony. People much wiser than me have tried to do that and found it beyond their ability to state clearly.

Romans 1 is the clearest passage in Scripture that tells us about the unbeliever’s knowledge. It tells us that God’s glory is clearly revealed so that non-believers, pagans (as he is writing about in Romans 1), have a clear knowledge of God. In fact, in Romans 1:21, it even says that these pagans know God. They don’t just know about God, but they know God.

So they are not ignorant. In a way, what they need is not additional information. Now in a conversation between a believer and a non-believer sometimes there is an exchange of information. If the unbeliever claims not to know something, we have to remedy that claim at least.

But in the most profound sense, the non-believer knows God even though he rejects God. Paul goes on to say in Romans 1 that as a non-believer suppresses the truth in unrighteousness, he exchanges the glory of God for the glory of things in the created world and makes statues and images and worships these idols instead of worshiping the true God. This is unbelievable if you know the glory of God.

And then Paul goes on to show how that naturally leads to very gross sins in the area of sexuality, and then toward the end of the passage he gives a very long list of different kinds of sins that all arise out of the suppression of the truth — this exchanging the truth for a lie, as he puts it.

What does that mean? What is it like to know God that clearly and yet to be suppressing that knowledge of God? Well, psychologists have ideas about the subconscious and how people sometimes repress the truth into a part of their consciousness that they are not entirely aware of themselves. We are often mysteries to our own selves. We can’t understand ourselves in many ways.

Practically, I don’t know if that is a good description, because the Bible doesn’t give me a precise description of what takes place. But practically, I think what happens is that when you are talking with a non-believer, you can agree on things like the sky is blue and this is an evergreen tree, and it is not a pumpkin. So you can agree on ordinary things. But the closer you get to talking about God, the closer you get to talking about Jesus Christ, the more disagreements come and the more fervent the disagreements become.

And so it’s a paradoxical situation. The unbeliever is always pushed back and forth. He lives in God’s world, so he has to acknowledge certain things about God’s world. When you jump up in the air, you fall back down again. And if you ignore that knowledge, then you won’t live very long. He has to acknowledge certain things and yet he tries so very hard to squeeze God out of his knowledge.

I think of Satan, for example, as a worst possible example along those lines. In one sense, Satan knows more about God than I do, or than any of us do. But Satan tries the terrible project of trying to replace God on the throne. And it is just laughable that anybody would try that. But essentially, that is what Satan tried to do and that is what unbelievers try to do.

Now, I say that is a pretty good description of irrationalism from a philosophical standpoint. This is really a repudiation of reason, because a reasonable person doesn’t turn away from what is clearly evident in his eyes. But the non-believer, therefore, is an irrationalist.

Well, that’s actually a pretty good philosophical description of rationalism. A rationalist is somebody who trusts his own reason as the final and ultimate standard of truth. Well, here I am: I have said that the unbeliever is an irrationalist, and I have also said that he is a rationalist. And which one is he?

The fact is that he bounces back and forth. The desire of his heart is to be irrational, but when he gets into trouble that way, when he finds out that he is living in God’s world and he can’t behave that way, then he tries to set up some kind of an orderly type of thought based on his own reason, and that doesn’t work either. And when that gets him into trouble, then he jumps over into irrationalism.

And Tony, I think that is a pretty good guide to the way the history of philosophy progresses. You have one generation of philosophers like the skeptics in ancient Greece, and they take an irrationalist, relativist kind of view. And then another group of philosophers like Plato and Aristotle come along and try to show that reason is reliable and dependable. And then you have another generation that questions Plato’s assurances. And so the history of philosophy tends to move from rationalism to irrationalism, and some philosophers, of course, try to come up with combinations of the two, which are always unstable.

So that is the most helpful way I know to describe the unbeliever’s mentality, but it is paradoxical. It is difficult to understand. In fact, it is impossible to understand consistently, because it isn’t consistent.

Fascinating. So let’s make this concrete and put this discussion into the context of non-Christian novelists. It seems like in the best non-Christian literature, authors grasp some sense of what is true, good, and beautiful — like the beauty of self-sacrificing love. It is beautiful to give your life for others. And they understand the human condition in some really authentic and profound ways too.

Years ago, I remember reading an article of yours, and you said something to the effect that no one can suppress all the truth all the time. And for me that was illuminating. The image I have in my mind is that truth is everywhere in creation, and being in the world is like a pool. Truth is like being surrounded by Ping-Pong balls, and the suppression of truth is like trying to hold down a hundred Ping-Pong balls underwater at all times. Does that work for understanding non-Christian novelists and their perceptions?

Yes, that is a great illustration. And I appreciate the novelist tradition because often what they come up with (and it is surprising) are stories and images that are analogous to the story of redemption in the Bible.

And that is because, I think, everybody knows in his heart that what we need as human beings is redemption from sin. What we need, above all, is not more food, more entertainment, more goodies. What we need is forgiveness. And so they write stories that allow for that, which picture that in various ways, but most of the time they don’t tell anywhere near the whole story.

Yes, and in some sense, novelists can speak to what they know is true, but don’t embrace as true, perhaps. Is that true? So perhaps in a novel more Ping-Pong balls get to the surface.

Bingo. That is gold. Thank you, Dr. Frame. I appreciate your time these past two days.

Thank you, Tony. I enjoyed being with you.