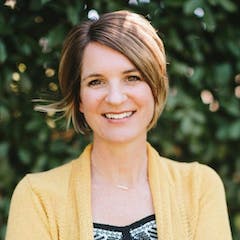 Jen Wilkin is an author and Bible teacher. Jen and her family are members of the Village Church in Flower Mound, Texas, where she serves on staff. She is author of Women of the Word: How to Study the Bible with Both Our Hearts and Our Minds and most recently In His Image: 10 Ways God Calls Us to Reflect His Character.

Women of the Word: Reading the Bible for Ourselves

The Bigger Thing in Bible Study

What Women Need Most for Better Bible Study

Jen Wilkin is an author and Bible teacher. Jen and her family are members of the Village Church in Flower Mound, Texas, where she serves on staff. She is author of Women of the Word: How to Study the Bible with Both Our Hearts and Our Minds and most recently In His Image: 10 Ways God Calls Us to Reflect His Character.

Women of the Word: Reading the Bible for Ourselves

The Bigger Thing in Bible Study

What Women Need Most for Better Bible Study

Today we’re joined by our friend Jen Wilkin — wife, mom, Bible teacher, and author of the fabulous book Women of the Word: How to Study the Bible with Both Our Hearts and Our Minds. The book turned four years old this summer, and it’s already sold 200,000 print copies alone. Incredible. A whole forest has died, and for a good cause. Jen, besides clear-cutting an entire forest, what did you set out to do with that book?

Where Do I Start?

When I set out to write Women of the Word, I never thought I would become an author. I was just head down, teaching the Bible in the local church. The book just captures the method I had come to identify as being helpful for women over the years.

“I was trying to apply basic interpretation tools that you would use with any book to the most precious of books.”

I had developed a method based on my background, having studied English and having studied literature. I was trying to apply basic interpretation tools that you would use with any book to the most precious of books.

Women were conditioned — by the resources that had been created for them, which you would find in the typical Christian bookstore — to passively receive instruction about the Bible. But they were not growing in their capacity to rightly divide the word on their own, and that was problematic to me.

I never intended to write a book. I had blogged some on the ideas, because I just wanted the content to be there for the women who were doing my study. I didn’t even know that anyone was reading my blog. I didn’t even know how to check the stats for the first year I had a blog. That was kind of good, because I think I would have panicked if I had known that people were reading it.

I got a call one day from a publisher, saying, “Would you want to write a book?” So I did.

I thought I could pawn it off on a few of my family members and could use it in my Bible study. It ended up being read by a lot of people, which is pretty exciting because when I started talking about Bible literacy, I perceived it was a problem that was pervasive in the environments I had had exposure to.

I suspected it was a larger problem, but I would say I got confirmation on that once the book came out. It feels pretty gratifying to think, “Hey, we could actually make a dent in this. People can perceive their need, and they can perceive that there’s a way forward.” So who knows ten years from now or twenty years from now what might be the fruit of that?

“No One Ever Taught Me”

Amen — we’ll you’ve made a dent for sure, at 200,000 print copies sold already. So four years out now, what has been the most surprising reader response to the book?

People saying, “I’ve been in the church my whole life, and no one has told me how to do this.” I had heard that from women, but I did not think I would get that e-mail several times a week.

I began to realize that when we talk about Christian discipleship, we have had a blind spot around this. We have thought that the sermon was enough to teach people the Bible, or we have assumed that they already had basic Bible literacy — neither of these assumptions was accurate.

“The main obstacle in Bible reading for anyone is not knowing where to start.”

But then we need to guard them as places for active learning. In other words, the teacher doesn’t do all the work, the student is going to work as well. So to have places where people are learning not just to absorb content, but actually to engage critical thinking around what they’re learning is what I believe the church needs as we move forward into a post-Christian culture.

Speaking of trends. You’ve been teaching the Bible for many years. Inside the church, are you encouraged at Bible trends in the church? Or concerned? What do you see?

I’m encouraged by a trend that others find to be alarming, which is that people are leaving the church. That sounds terrible. That sounds un-Christian. I don’t believe that the church of God shrinks.

I think what we’re seeing is a revelation of who the church truly is. Those who remain are going to be more committed to owning their faith than previous generations. Bible literacy will be a big component of that. We have one book that we are responsible for. It’s made up of 66 books.

That’s not an unlimited amount of content. Although none of us will master it in the years we have during this life, we can take a pretty good crack at it, if you give us some decent tools.