This is a weekend for remembering the ones who died in our nation’s service. For me, the memories are mostly of high school friends who died in Vietnam.

Today, my heart goes out especially to the ones whose memories are fresh and raw, hardly far enough in the past to be called “memory”—friends and family of American military personnel who will not return to them from the Middle East.

Here and there around the cemetery this morning were old men and women, caring for and adorning graves already well-tended. I imagined that they were honoring a friend or family member who died in World War II or in the Korean conflict.

This is a weekend for all Americans to give thanks for what God has given us through the sacrifice of all the men and women who have died for our country. However great the faults of our government and whatever our dissatisfactions, we have much to be grateful for.

If we had had our way, our much-loved granddaughter, Felicity, would have been crawling around in the grass during our Memorial Day picnic this weekend. She would be living and experiencing the privileges of being an American citizen—if we had had our way.

Instead, she has always been and will always be a citizen only of the land of promise, the city whose designer and builder is God (Heb 11:9,10). And though we still weep to hold her and know her, what more could we ask for her? She will never have to struggle over her true allegiance as we do who are citizens of both an earthly nation and the Kingdom of God.

Thank you, Lord, for the ones who have died to protect our freedom here. And thank you even more for your kingdom, which can never be threatened by any enemy. 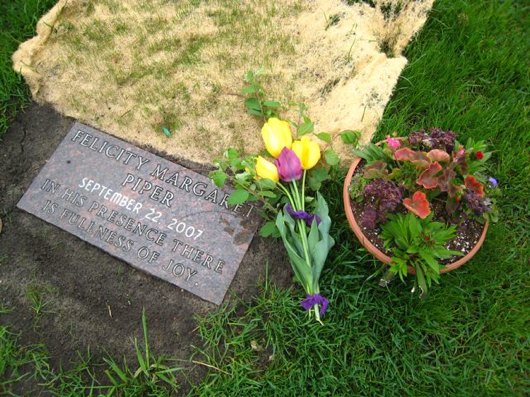