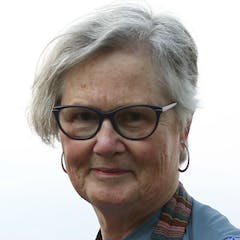 Esther Nelson is a stranger to you unless you’ve heard me talk about her, or you’re her distant relative, or you’re part of the church that she called home (probably in the older fraction of the congregation).

In 1924, Esther was sent to Sichuan, China, by her beloved home church, First Swedish Baptist of Minneapolis (now Bethlehem Baptist). Her years there spanned some of China’s most tumultuous periods: warlords vied for territory, the Nationalist government held sway for two decades, Mao undertook his Long March, bandits endangered travelers, the Japanese invaded the country, World War II broke out (as did civil war), and the Communists took power. Several times, anti-foreign activities forced Esther’s evacuation to a safer part of the country.

Born in Blekinge Län in southern Sweden in 1890, Esther traveled in 1893 with her mother and five siblings to Minnesota, where her father had moved two years earlier to set up a new home for their family. As a small child, she and the other children were sent to a small Sunday school. Years later, she wrote in her personal testimony,

All I remember was my love for Sunday school and the church and that I was called to go to a foreign country as a missionary. I know not why or how I had this call or assurance. I just thought and said I was never going to marry or settle down, for I was going to Africa.

Nevertheless, even at that early age, Esther knew she was not yet a Christian. She wrote, “I knew I was not saved and that I must first be a Christian myself, or how could I tell others? As far back as I can remember I longed and prayed for salvation.”

Esther searched for Christ through her childhood and the majority of her teenage years, spending untold hours reading her Bible, praying, and crying before God. From the farm where her family had moved when she was 11, she walked the three miles to church to attend every event she could. “I could not understand why I could not find Christ,” she wrote later. She thought perhaps she was too wicked, or had committed some unpardonable sin, or was simply an outcast from God’s kingdom. She often cried herself to sleep.

How Happy and Free

At age 17, Esther’s path took a turn that led to her prayers being answered. Her mother sent her to the city to work as a domestic servant in a private home. She thought, “In Minneapolis, of course I would find him there.” She told the story in her testimony:

How I prayed that I would be led to a church. A certain Thursday afternoon I had a telephone call from Anna Anderson, a neighbor of ours at home. She too had come down to work. She asked me if I would like to go with her to prayer meeting. I almost cried with joy. I went. How I feasted.

Two or three months later, I gave my heart to the Lord in our own church basement. How I love that place. How happy, how free I was. Those years from the time I became conscious of my condition until I surrendered to Christ had seemed like an age.

Her seeking was over, and it was finally time for Esther to prepare herself to answer the call to missions she had felt for so long. Since she had not yet studied beyond high school, she pursued further education at Bethel Academy (now Bethel University) and then received nursing training at Swedish Hospital.

One page of Esther’s handwritten story is missing, where she must have explained why she didn’t go to Africa, the continent she had dreamed about as a child. Perhaps when she finished her nursing training she was needed in China. When it was clear China was her destination, it became the home of her heart. In a letter to the congregation of First Swedish Baptist Church, she wrote,

One more night in this dear home country and then farewell.

Finally brethren and sisters — fare thee well. “Be perfect, be of good comfort, be of one mind, live in peace, and the God of love and peace shall be with you.” II Cor. 13:11

As I leave you waving farewell, I turn and on the other side there is the waving and beckoning of welcome — my chosen people. May God bless you.

As God prepared Esther for China, each step separated her further from her family. She was the only one who became a Baptist, considered a heretical sect by the Swedish Lutheran church of the day. Her siblings completed only four to eight years of school, a common amount of education for many farm families in Sweden and Minnesota. And then each of her siblings married.

For all of the Nelsons except Esther, the epic chapter of their story was their farewell to their Swedish homeland and their journey to America. It’s doubtful that any of them understood Esther’s determination to continue farther around the globe. Certainly her mother didn’t. After becoming a widow, her mother assumed that unmarried Esther would remain with her and care for her.

This intense persistence toward knowing and pursuing God’s will marked her life. It allowed her to make light of situations that others would flee. In 1935, in the midst of Mao’s Long March, quilts on the floor of the overflowing hospital’s hall were used as beds for casualties of nearby skirmishes between Nationalist forces and Mao’s followers. In a letter to her friend Elsie Viren, she wrote,

The Chinese people were leaving by the hundreds. We were asked to hold ourselves in readiness for immediate flight. Somehow, foolish me just could not get myself to pack. We were heartsick. There is nothing harder than to leave and run. It takes courage to do it. As I do not have much of that, I asked to stay. I was finally told I would be allowed to be part of the skeleton. I was happy. I hate to go. I like to stay put. (I do not know what part of the skeleton I was.)

Between 1924 and 1945, Esther worked primarily as a nurse and medical educator in Baptist hospitals in the city of Chengdu and then in Yibin and Ya’an, villages farther south in Sichuan. In a letter to her church, she wrote of the effects of the regional deficiency of naturally occurring iodine. “This is a terrific goiter belt — huge goiters which hang down in great mass and also small ones. Most people have them, even children.”

Perhaps you are getting tired of hearing about the wounded and sick but this past month I have been nowhere else, not even to church. Outside of wounded soldiers we are now fighting malaria, relapsing fever, typhoid fever, and dysentery.

Without a husband or children, Esther could give herself to caring for the wounded and diseased Chinese that came for help. But she yearned for more than her neighbors’ physical healing. She longed to take Christ beyond the hospital walls.

In addition to administering medical care, Esther would distribute gospel tracts and booklets to the patients under her care, as well as neighbors she encountered on the way to and from the dispensary. “I have such a lovely time, making friends along these two blocks,” she wrote. “I often sit down and have a little chat with them. The minute I step out, children call me and crowd around. How I love to be out with them.”

In 1945, Esther’s denomination, the Baptist General Conference (formerly the Swedish Baptist Conference) formed its Foreign Mission Board. In her application to the BGC, she wrote,

After working in hospital these years, now I would like to give all my time to evangelistic work. I have also thought of getting into new territory where the Gospel is not known.

At the end of 1947, when Esther was 57, God answered that desire. Her last China chapter was in Huili, near one of China’s minority peoples, the Nosu. Her American coworkers were two young couples with small children and another single woman.

As often as she could, Esther trekked as far as twenty to thirty miles out into the stark, steep mountains to remote communities. She would speak in the outdoor market area until she was hoarse, perhaps using the flannelgraph and collapsible easel given by her church. And as in Huili, she’d go door to door, visiting villagers one by one. She wrote at one point,

I am just back from a week’s trip of 20 miles. Most of the time, I prayed the Lord’s blessing on those Gospels and tracts.

The first half of our return was uphill, some very steep. We had given out only five or six Gospels with some tracts, so I wondered why I should have gone that long hard road and accomplished nothing. It came to me, who knows? — Only the Lord. Perhaps one of those people was the reason for our trip. Back at the inn, we learned that the road we had traveled was robber-infested. But the Lord kept us.

After the 1949 establishment of Communism in China, “liberation” spread across that great land, reaching Huili in 1950. Foreigners were ordered out. The grieving missionaries left behind a small church of about 25, uncertain of what their fate would be.

Esther lived another 24 years back in Minneapolis, never knowing how God was working in China out of the world’s sight. She did not know how God himself was continuing the work he had begun through Western missionaries, saving some fifty million Christians during the ensuing decades of China’s Communist regime.

There is no marker on Esther’s grave in Minneapolis, a reminder that her memorial is not stone, but the hearts of Chinese people touched by her Savior.