When we knew Alex and Brett Harris would be in town for the DG Pastors’ Conference, we wanted to catch them for an interview. Who better to interview two popular young bloggers than another young person? The guys were glad to sit down with Talitha Piper, 12, and answer her questions.

The message of the 19-year-old twins is, “Do hard things.” That’s also the title of their book, available in April.

They are high school grads, homeschooled all the way, and applying now to colleges for the fall or spring. In the meantime, this year is filled with writing, organizing Rebelution conferences (4 in 2007; 7 in 2008) and answering the emails they receive through their website. 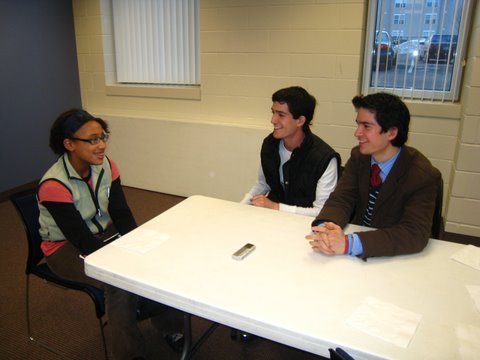 Talitha's Interview with the Harrises

Alex and Brett, the name of your ministry and your website is The Rebelution. Tell me how you got that name.

Rebelution is a combination of the words rebellion and revolution. It kind of gives the idea of rebelling against rebellion. As we wrote articles and developed the ideas, it came to mean a teenage rebellion against low expectations.

Tell us the kinds of things you’re responsible for in a normal week.

Right now, we’re out of high school and are taking a year off before college, because we feel like God has opened a lot of doors for us with our ministry. We have breakfast with our family and then go to our computers. We get tons of emails that we look through and respond to. Then there’s lots of coordinating of the conferences—creating brochures, keeping the website updated, arranging meeting places, recruiting volunteers, and many more time-consuming details.

Up until recently our book was the major thing we were working on. It took up just about every waking moment. We like to say God has a sense of humor, so if you write a book called Do Hard Things, he’s not going to make it easy. We just finished the last minor changes—we think. We finished the book about 27 times.

Besides that, we write for our blog and for some Focus on the Family publications.

Next week, we go home and record Do Hard Things as an audio book so it can be released at the same time as the book.

We try to keep our evenings free for time with our family. We always have family worship in the evening.

What’s a Bible verse that keeps you going in your faith?

There are 2 that have driven what we do with the Rebelution. The first is 1 Timothy 4:12: “Don't let anyone look down on you because you are young, but set an example for the believers in speech, in life, in love, in faith and in purity."

What’s so neat about that verse that it’s not just saying, “Hey, don’t look down on me because I’m young”; it’s challenging the young person to be an example. That’s the high standard, the calling, that God has for young people.

That’s the theme verse of the Rebelution—rebelling against low expectations is really pursuing God’s standards.

Another verse would be 2 Timothy 2:22: “Flee youthful passions and pursue righteousness, faith, love, and peace, along with those who call on the Lord from a pure heart."

That also captures the Rebelution, because we’re supposed to rebel against low expectations, and flee youthful lusts, and supposed to do hard things like striving after these godly standards, and we’re supposed to do it along with other people who also care about those things and love God with all their heart. That’s what the Rebelution is about. It’s not just an isolated thing. We’re trying with our website and our conferences to bring young people together who share that passion.

Who are some heroes in your lives?

We have many heroes, both living and dead. In fact, that’s one of the principles of the Rebelution. We tell people that we want them to make friends with dead people. You can sit down with a book all night long and dialog with a person long dead. We have a lot of heroes like that, for example, Francis Schaeffer and Jonathan Edwards. Our living heroes would include our parents and your father, Talitha. He’s shaped us in many ways, so it’s an honor to be interviewed by you. Others would be Randy Alcorn, C. J. Mahaney, Al Mohler, Mark Dever and people that our brother, Josh, has introduced us to through his New Attitudes conferences.

We try to have heroes in different areas, for instance, political heroes like Theodore Roosevelt and Ronald Reagan. We look for people that embody the person we want to be later in our lives—husbands, fathers.

The title of your book seems to be a slogan for you—Do Hard Things. Where did you get the idea for that slogan?

It’s something we learned from our father. He told us about the Vikings—not the Minnesota Vikings. They raided villages and everyone was afraid of them. They weren’t nice people. One thing that made them unstoppable was the strength they had from rowing those 20-ton ships with their own muscles. Their strength came from doing themselves the hard labor that other seafaring people left to galley slaves. That’s a lesson for us and other young people. If we are willing to do those difficult tasks that other people neglect or ignore, we’ll gain strength from that.

That gave us the idea for “Do hard things.” We realized that’s the way God’s created us to grow. In every area, doing hard things is the way that God’s making us grow.

Give me 2 or 3 sentences that tell me the heart of your book.

Brett: In the book, we quote G.K. Chesterton, “The Christian ideal has not been tried and found wanting. It has been found difficult and left untried.” That’s the goal of our book and our ministry, calling Christian young people to be the generation that finds it difficult, but still tries.